The arrival of Scream’s Ghostface is only the beginning of what the studio promises will be another strong year.

Over the weekend, Dead by Daylight developer Behaviour Interactive previewed its upcoming new chapter and killer, Scream’s Ghostface, during a livestream event celebrating a successful third year of the game. Following that, the studio also debuted a developer diary video for Year 4, which features a roadmap of all the new content and improvements on the way over the next twelve months.

Of course, the first item on the list is the addition of a new killer, which has been known about for quite some time. Ghostface and all associated chapter content will be arriving later this month. Players can also look forward to a long-awaited rework of A Nightmare on Elm Street’s Freddy Krueger within the next few months. The developers say the killer’s new gameplay should feel much more like the Springwood Slasher fans know and love from the films. These changes should help players sleep that much better at night… maybe.

Over the course of the next year, players can also expect three more chapters to drop beyond the arrival of Ghostface. Additionally, more lore content will be available in a series of updates for the Archives, featuring gameplay goals that will allow players to earn Blood Points, unlock cinematics, and more. These unlockables will make available plenty of history any fan of horror can appreciate.

In terms of maps, players can expect two location reworks in Year 4. Only the first has been revealed so far, which will be an all-inclusive improvement to the Badham Preschool level. Two new maps will also arrive over the next year, paired with the releases of chapters 13 and 15. All throughout the year, players can also expect extensive gameplay balancing to keep everything feeling smooth, as well as a reworking of rank initiatives.

Under the hood, the Dead by Daylight team will be hard at working getting dedicated servers ready for release sometime this summer. With this feature, players can expect major improvements to the overall gameplay experience, since these environments will be able to handle disconnects and other issues far better than client connectivity can. Matchmaking algorithms will also be improved in the process, not to mention additional ongoing optimization and bug fixes throughout the year.

Finally, two new versions of the game can be expected in Year 4. The first is the Nintendo Switch port that was recently revealed to be arriving on September 24th. The second discussed during the roadmap reveal is the upcoming mobile version of the game, which the developers say will be a much different experience that is exciting nonetheless. You can certainly expect more details on the latter release in the coming months.

That about does it for the Dead by Daylight Year 4 preview. If you haven’t already, give the video a watch above and hear from the developers about what’s ahead in a little more detail. You can also check out the published version of the latest roadmap below. As usual, stay tuned for all the latest news and updates on the game right here on Dead Entertainment. 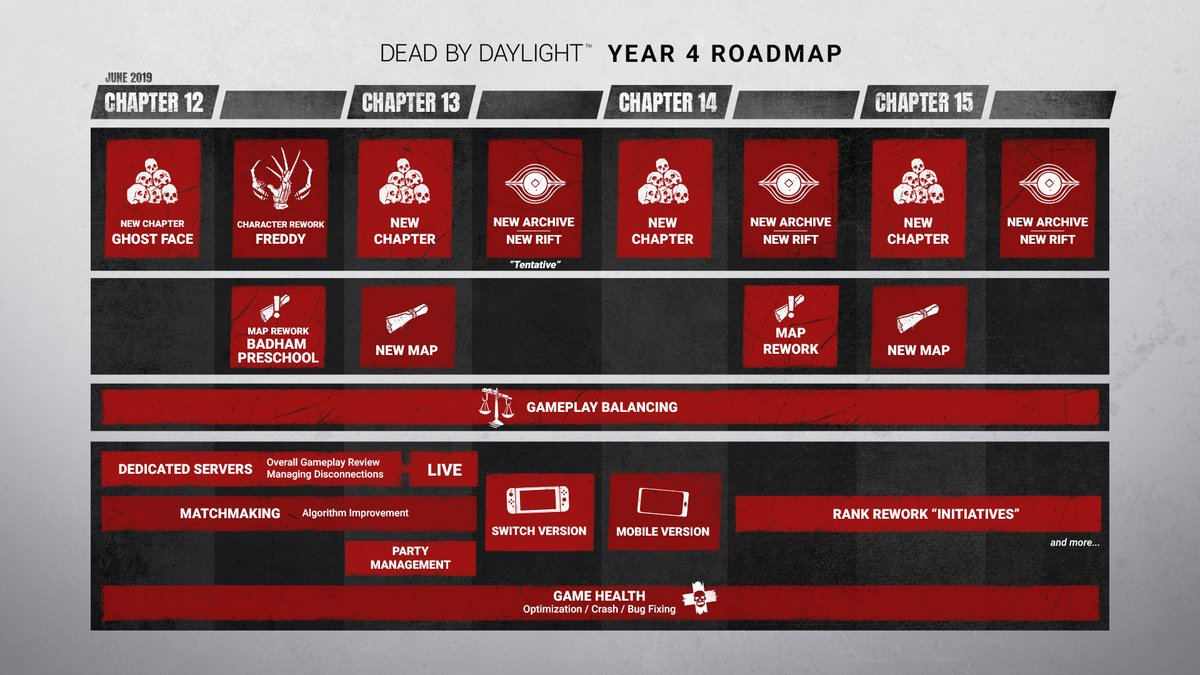