This season of The Purge TV series revealed what occurs behind the doors of the NFFA. We have seen the cutthroat activities of the organization that not only implemented the yearly night of bloodshed and lawless crime, but also is behind the mechanics keeping citizens in line throughout the remaining 364 days of the year.

The explosive finale provided plenty of opportunity for a third season, in my opinion, if USA Network and Blumhouse decide to travel down that road. For now, let’s get to our final recap of the season.

As promised, a familiar face of the franchise made a guest appearance during the opening of this week’s episode. The sequence shows a man during a tour of the NFFA facilities in New Orleans. He is having trouble accessing a room designated strictly for operators and managers to communicate to the public during Purge Night.

With a promise to have that rectified, it’s suggested they ask for assistance from James Sandin. Fans of the franchise will recognize Ethan Hawke, who plays the character in the first movie. He walks them through the steps of resetting the system and assures them they will be safe, adding that it’s similar to the security system he uses for protecting his own family.

As we know, his high-tech home could not save him from Purgers and he fell victim in 2013’s The Purge. While it was a neat idea to include Hawke in this way, it’s a bit confusing how they thought they could get away with a present-day-looking Sandin while referencing the past. Regardless, it was a nice touch to have the first film and last TV episode collide for the show’s season finale.

With the end of the biggest heist in sight and a reunion with his buddy Tommy, Ryan is not surprised with the Jackals’ actions. As they try to flee, a fiery school bus cuts them off. Before they realize what’s going on, we see Tommy exit the bus and give them the finger, which is personally a favorite moment of the episode for me.

To see this character return and have a more prominent part alongside his friend Ryan is great to see. Shout out to Jonathan Medina for his role of Tommy. This was a character I wasn’t sure would have more airtime, but he definitely came out fighting full-force over the last couple episodes.

With their plan in motion, they don’t have time to celebrate the score they obtained. Ryan hears over the scanner that the NFFA have located Esme, so he and his gang know he needs to go alone to help her. Tommy reassures Ryan that no matter what happens, they will take care of his mother for him. He takes off to the headquarters to assist Esme. Unfortunately, he will meet his fate for his act of bravery. 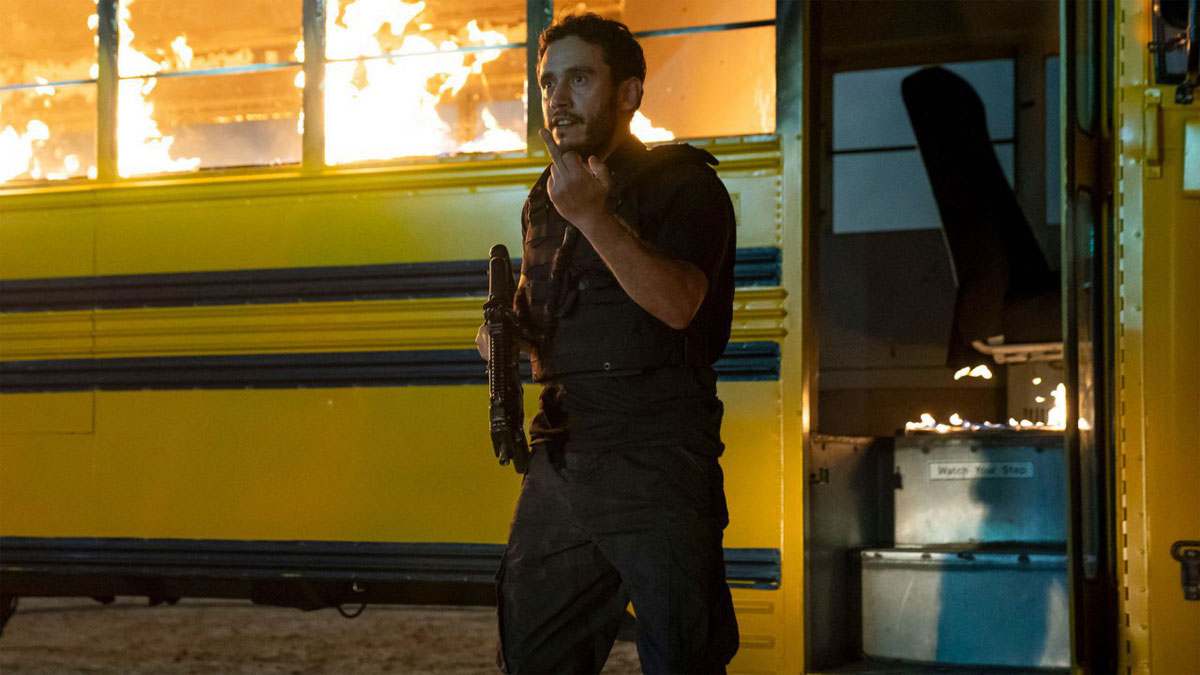 After gaining entry into the NFFA, Esme retrieves footage of the killing of her friend, Olivia Hughes. After sending the evidence to the broadcasting room, she is reunited with Vivian and explains that she needs to get to that room. Wanting to warn the public, the pair attempt to get there. Naturally, they don’t get far before Curtis confronts them with a gun.

Curious as to what Esme may have on Vivian to have her helping her, we think that he is going to let the women go, but at the last minute he raises the gun and shoots. Vivian takes the bullet as Esme turns and shoots the assailant back before tending to her friend.

Esme eventually makes it to the room and airs the footage. Ryan also shows up and stands on the other side of the barrier protecting her. Unfortunately, this move will cost him his life. He gets shot before her eyes, just as the siren blare signals the end of the Purge. Despite the annual night coming to a close, the hit squad is ordered to kill Esme, which is broadcast to the citizens.

All season long, certain storylines struck a chord with me more than others. That’s not to lessen the impact of other characters throughout the ten episodes, but it is hard to ignore Joel Allen’s incredible performance as the maniacal Ben. Similar to last season, our cast members have all come together for the finale in one way or another.

Last week, while Marcus was frantically trying to get his wife Michelle to the hospital, they encounter Ben. Unbeknownst to them, they were in company of the campus killer. Arriving at the triage, Marcus’ main goal is to save his wife but he tells the hospital staff Ben is in the back and also requires help. A nurse tends to the killer and tells him that he is going to be safe. Once Ben looks over and a scalpel is in his sight, we know that his urge to release the beast is not over yet.

We then shift our view over to Marcus, who is helping his wife by putting a tube in her chest. Hoping to help others, he leaves his wife to go and check in on the rest of the patients. He finds his way to the room where Ben was being treated but instead of finding the stranger he helped, he finds a bloody room. He wanders around and locates the doctor and a few others only to find out that Ben is there, who shuts the door behind him.

It doesn’t take long before we wonder if Marcus regrets his decision to help the injured young man. Ben tells Marcus he should have left him there, explaining that the good they are doing is actually taking the rights away from those who want to kill. Marcus tells Ben that he is not God, and he replies that he is. To save his life, Marcus attacks Ben with a needle, which knocks him unconscious. He is then thrown outside with the assumption that Purgers will finish him off.

With their leader gone, Tommy, Sara, and Doug arrive in Panama. They toast their fallen friend and decide how to spread the heisted funds around. Ryan’s share will go towards a movement created by Vivian, Turner, and Darren. The newfound resistance is seen using Esme’s face as the face of the group. Marcus, Michelle, Tonya, and Andre have also survived the night.

Thanks to Esme’s broadcast, her killing after the 7 AM siren rang out is aired for everyone to see. Marcus’ son Darren delivers a powerful speech as Sofia, Esme’s sibling, tells the people that her sister’s death will not be for nothing. They want to dismantle the NFFA and get rid of the Purge. If this sounds familiar, it was a somewhat similar plot to the film, The Purge: Election Year.

Remarkably, as the speech is going on, we see Ben with a knife putting on his beloved God mask. He has become an example of what the resistance is trying to get across to people. The Purge doesn’t deter people from killing all year long.

There is some speculation that we could get a third season and I, for one, would welcome that. I think there are still some avenues to explore with this franchise. With a new movie being released next year, is it possible that a third season of the TV series could be a continuation for that movie? We will need to wait and see.

Thanks to all those involved in this incredible second season! Until the next Purge… stay safe, everyone!

You’re nobody in America unless someone wants to Purge you.