The Purge Season 2 Episode 1 Recap: This is Not a Test

The series returns with the NFFA’s view from the skies.

This week saw the return of The Purge TV series on USA Network. The violent series based on the lucrative franchise of the same name finally provided viewers a peek behind the curtain on who keeps control on Purge night. The New Founding Fathers of America (NFFA) are responsible for implementing the one-night-a-year event in which citizens can release the beast and commit all crimes, up to and including murder, legally.

Before, with the first season as well as the films, we have always seen how citizens struggle to survive the night, how they fight back, or even how they participate in the Purge themselves, but we’ve never witnessed what really happens the rest of the year. What Season 2 promises to focus on is how people function and prepare during the year leading up to the next Purge night. On with the recap.

Season 2 finally introduced us to members of the NFFA and explained the rules of the Purge more in-depth, in particular what happens when the 12 hours come to an end. Utilizing surveillance cameras from all around the city, our new character Esme (Paola Nunez) watches emotionless as purgers are out doing what is their right to do.

Surprisingly (or should I say ironically?), even a night of mayhem comes with rules. There are weapon restrictions, namely no Class 5 weapons or above, but it is acceptable to light your enemy on fire. The expression "Big Brother is Watching" is appropriate right from the beginning of this premiere episode. The violence displayed on the monitors is brutal and uncensored, but this is The Purge and one shouldn’t expect any less.

So, what happens once the siren airs at the 12-hour mark, signalling the end of the event? This is something that has never been explored thus far. I, as a fan of the franchise, always wondered why this wasn’t mentioned in one of the movies. In this first episode, we learn that if you choose to Purge once the siren has sounded, your punishment is simple: death.

We also find out that as long as you are on public property when the alarm rings and you commit a crime, you will avoid punishment. Will this end up being a loophole that some of our cast may take advantage of? Additionally, if you’re caught using Class 5 (or higher) weapons, the cameras scan you for identification before you are sentenced to death. Interestingly enough, the government officials who are ranked high enough to be granted exemption from being purged are also tracked on surveillance. Could this play a part as the series progresses? 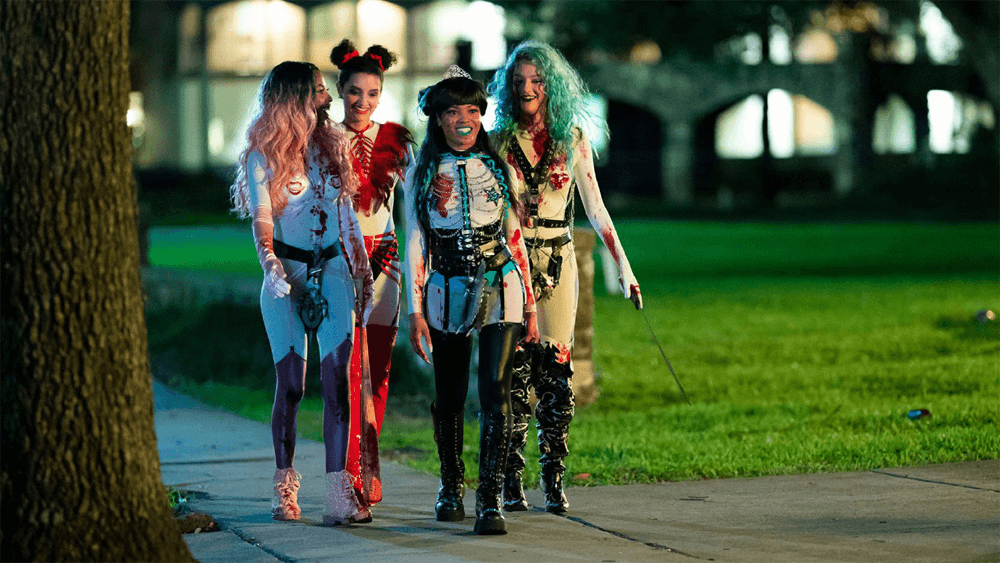 As in Season 1, all of our characters start off in their own storylines. Whether they will come together towards the end like last season, we shall see. The first episode was action-filled as Ryan (Max Martini) leads a bank robbery. Naturally, killing your enemy without consequence is a good thing, but wouldn’t it make sense to do crimes such as robbing a bank or looting so as to benefit you throughout the year? His storyline this episode was the most action-packed, that’s for sure. I think he will be one to watch as the episodes play out.

Marcus and Michelle (Derek Luke, Rochelle Aytes) are a couple who seem to be the targets of an anonymous stalker. They are locked down in their well-secured home, but is it really anti-Purge secure? We will need to stay tuned to further episodes to find out who and why Marcus and Michelle need to keep their guard up.

The last storyline to be explored during the premiere episode is our frat guy Ben (Joel Allen) and his buddy, college students who figure to venture outside for a scavenger hunt to take a photo of the “suicide bridge.” The two eventually stumble upon a tied-up woman. As Ben attempts to help her, he learns quickly he maybe should have stayed inside. Abandoned by his frat buddy, he is left with a difficult choice to make.

Overall, this episode was a nice welcome back to The Purge TV series. Not only did it have action, it also offered more insight into the mechanics of the Purge and those who are responsible for ensuring that people obey the rules. I am looking forward to next week. Stay tuned!