The combat, storytelling, and boss fights will shake things up for fans of FromSoftware, but one thing is certain: this isn't Dark Souls. 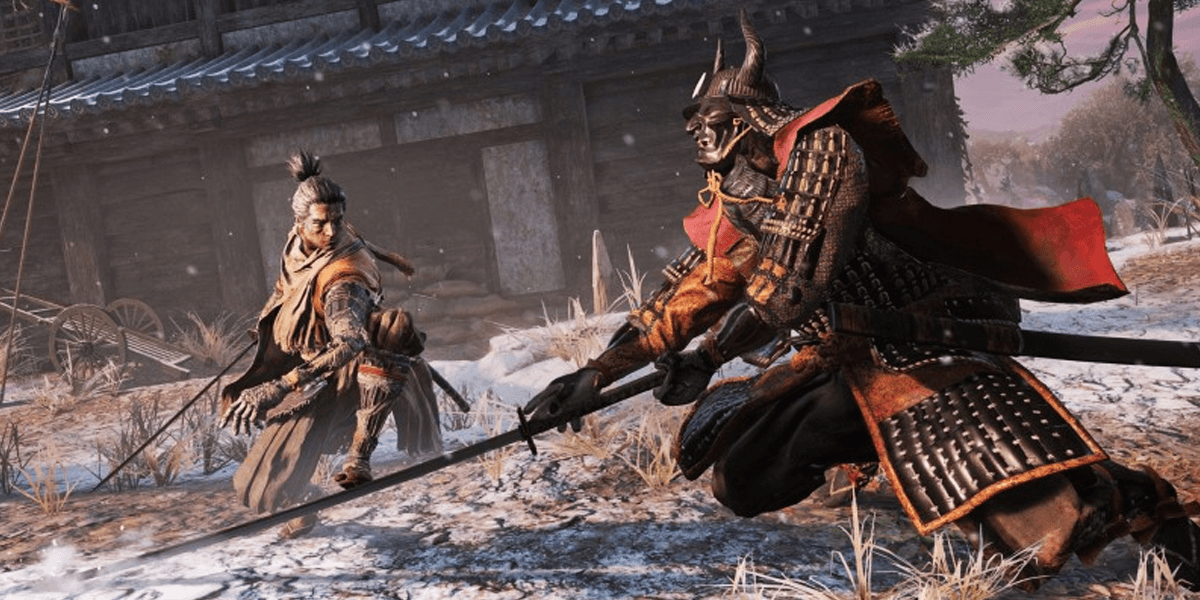 FromSoftware's upcoming dark ninja title Sekiro: Shadows Die Twice is drawing ever closer to its release date of March 22nd. In anticipation of this, video game publication Game Informer has secured a number of exclusive details about the game and, in fact, will have it as its featured cover next month. This ongoing extensive coverage has revealed quite a bit of new information regarding the story, combat, and boss fights as well as giving developer insight into the game's design.

Above all, the studio wants to make it very clear that Sekiro is neither Dark Souls nor Bloodborne. From a storytelling standpoint, the team has set out to create a more streamlined experience and has ditched its usual character building and RPG elements in favor of a central, defined protagonist.

Set in the Sengoku era of Japanese history, players take on the role of ninja warrior The Wolf, protector of the Young Lord, who is very quickly up against enemies under the command of the Ashina Commander. The Young Lord is kidnapped and The Wolf is defeated, leaving his arm severed.

After recovering from his wounds and being fitted with a prosthetic arm, he sets out to rescue his charge and seek revenge on the Ashina Commander. In an interview, FromSoftware's manager of marketing and communications, Yasuhiro Kitao, elaborated further on these details in the featured piece.

Game director Hidetaka Miyazaki doubled down on this sentiment, emphasizing that the world of Sekiro is unlike anything fans of the company have experienced in their previous titles from a storytelling perspective.

Despite these changes, however, Kitao assures gamers that everything will still fall in line with expectations and that the character of The Wolf will not be overly dramatic or chatty. “It's actually a very 'From’ way of doing a protagonist," he explained. "And the way he conducts himself and the way this character kind of evolves is very kind of From-esque. He'll say a few things here and there, but yeah, he won't bore you to tears with constant monologues."

Furthermore, Sekiro will keep the same fragmented lore that the Souls games made famous with Kitao adding, "We don't want to rob the experience of that kind of fragmented storytelling. We want it to be a user-driven story, a play-driven experience rather than [something] directed by us. We don't want to feed the user every little bit of information. We don't want to tell them straight-up the answers, or how something is. We'd like them to experience and explore that for themselves."

Overall, it would seem that the studio is keeping the best plot elements from their flagship franchise while also taking on a more personal, story-driven narrative. We are interested to see just how well this will work in the finished project. Just make sure that you aren't expecting another standard Dark Souls experience.

Likewise, combat will play out a lot differently in Sekiro. "We feel like the initial impression is going to be, ‘Wow, these enemies are really tough! They have a strong defense,'" game designer Masaru Yamamura explained in another interview. "When the enemy’s attacking you, you can deal damage to them, you can wear down their posture by deflecting their momentum and their attacks." Mashing the attack button simply won't do and players will have to master the game's deflection techniques if they want to deal the most damage to enemies effectively.

Stealth and exploration will also be a much more essential part of the game, with Yamamura warning players they may not just want to run into combat without digging a little deeper. “The eavesdropping mechanic, conversations with NPCs, overhearing enemy conversations – these are ways you can learn about the world, and gain hints about combat as well," he stated. “The game is designed in a way that we’d like users to experience all these [options] and to incorporate them all into their toolset, and to take on challenges by thinking, ‘What could I take from my repertoire in this situation? How could I apply that here?’"

Despite the game's focus on close-quarters blade combat, Yamamura did specify that players that are more accustomed to using magic or other long-range weapons will find solace through the use of the game's unlockable skills and various prosthetic arm add-ons. "If a user wants to use a particularly heavy, slow attack, then they’ll find something in the combat arts," he said. "The prosthetic tools have a variety of more, I suppose, martial arts or ninjutsu-based attacks that could be perceived as magic, as well.” So, while the RPG elements and class-based system from Dark Souls is absent in Sekiro, players will still be able to find the skill set that works best for them and have a lot of variety while taking on the game's foes.

Bosses have always been the bread and butter of FromSoftware games as well, especially in Dark Souls. These encounters are memorable and intense experiences, challenging players to adapt and survive. Regarding bosses in Sekiro, things will play out a little differently. Unlike Dark Souls, where players can more freely customize their characters and adopt different play styles, Sekiro's focus on a fixed singular character led the developers to approach these boss fights bit from a fresh perspective. FromSoftware community manager Yasuhiro Kitao elaborated on what to expect.

In Dark Souls, the way players fought a boss largely had to do with their chosen character class, with a mage using ranged magic or a knight using their shield to block and counter-attack. On the contrary, boss fights in Sekiro will challenge players to approach the fight in different ways based on the game's unique movement and The Wolf's arsenal of tools and weapons. For example, a boss fight can play out uniquely if the player opts to use stealth over a straightforward approach. The grappling hook in particular seems to be a game-changer, allowing for rapid vertical movement across the area in a flash. Sekiro director Hidetaka Miyazaki offered up a take on the new style.

Game Informer then shared their experience taking on a boss named Lady Butterfly, a small and much more nimble foe compared to most traditional FromSoftware bosses, that uses an arsenal of dirty tricks and speed to keep the players on their toes. The key to this fight is apparently to keep applying pressure and staying on the offensive. Lady Butterfly has the ability to create multiple illusions, or "ghosts," of herself, leaving players unaware of the true target and surrounded by multiple enemies at once. However, this can countered if players take the time to explore the world before the fight: a dying soldier right before the boss gives a hint to use a particular item to reveal the real Lady Butterfly.

Overall, it seems most of the bosses will all have their own tricks up their sleeves. Miyazaki confirms this, stating, "You don’t often see [this] in boss fights. They use really dirty tricks. They’re real devious, real underhanded techniques." He also confirmed there will be harder-than-usual optional bosses, a staple of FromSoftware games.

With the system of collecting and upgrading your character with souls gone, defeating bosses will now earn different types of rewards. However, Miyazaki promises there will still be feeling of accomplishment and satisfaction for defeating these difficult foes.

Which of the new details revealed about Sekiro: Shadows Die Twice are you most excited about? We personally can't wait to get our hands on it in just a few short months.