Why Rick Needs to Die and Other Shitty Walking Dead Takes

Are we even trying to make sense anymore? 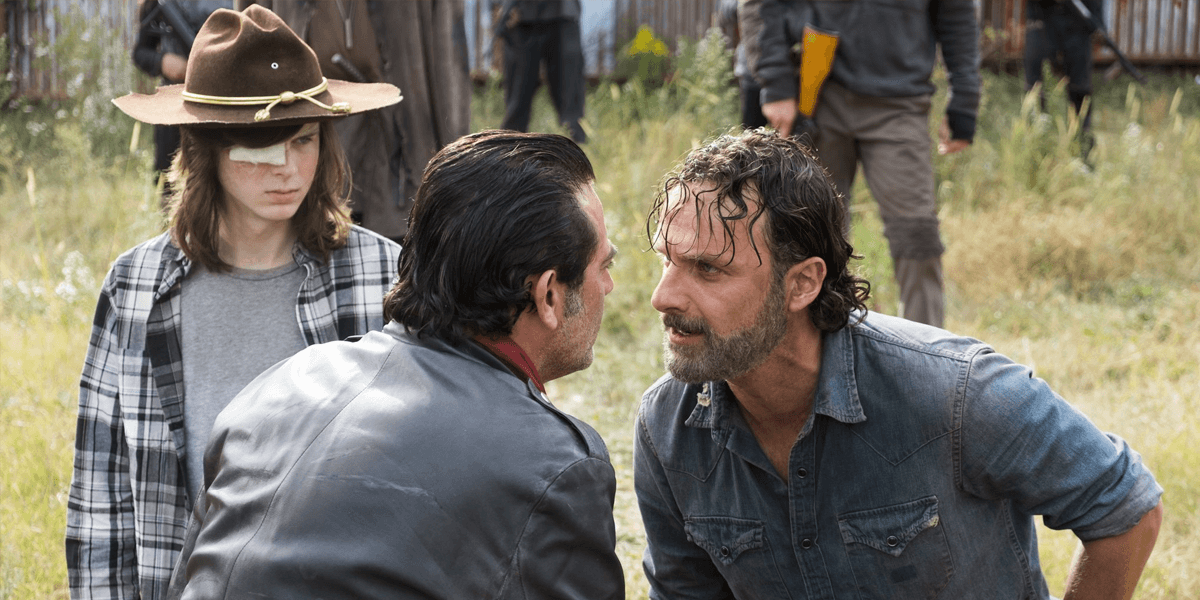 Rick Grimes is going to die. No, this is not a spoiler of an upcoming episode or even something that comic book readers might know that show viewers do not, but it is going to happen at some point in both of these mediums. That much is inevitable. Hell, series creator Robert Kirkman has said as much, but not really in any specific way. However, make no mistake, The Walking Dead is the story of Rick Grimes and that will continue to be the case for the forseeable future.

Regardless of what any given bad take on the TV series suggests needs to happen to save the show from what is often described as a total ratings a free-fall, despite still boasting numbers that many shows would be glad to have, this isn't something that's going to happen anytime soon or make sense for that matter. Sure, viewership is in decline for The Walking Dead and many fans have begun to tune out for varying reasons. Whether it's Negan fatigue, the overall structure of the show, or even the changes being made to move away from the source material, there's always one take that just has it all figured out.

When I came across more than one article suggesting that Rick needs to die to save the show, it was pretty easy to dismiss them and laugh it off, but interestingly enough, it does provide a more clear glimpse into what some actual issues of the show are. Of all the problems that The Walking Dead faces, the idea of killing or getting rid of Rick certainly solves exactly none of them. On the other hand, looking below the surface of takes like that illustrates a major problem with the show right now: the pacing.

A lot of the reasons people are tuning out of The Walking Dead can be traced back to that. By the time the war with the Saviors wraps up, presumably in the upcoming season 8 finale, it will have been 33 episodes since Negan lined up our good guys and introduced himself. Even longer if you count the earlier skirmishers with the Saviors that led up to that monumental event where our heroes were beaten and left at rock bottom. There was a whole lot of great story to be told around the All-Out War arc, but I truly believe this has gone on too long and the frustration at watching some of these stories play out over a longer period of time is more than understandable. This is totally putting aside the legitimate grievances of filler episodes where not much is accomplished, or splitting our characters up to make them take the scenic route to narrative fulfillment. Those are merely symptoms of the same problem though, aren't they?

Most of season 7 consisted of picking up the pieces post-tragedy while continuously watching Negan have the upper hand over each of the groups, while the current season was all about them finally getting their shit together to fight back. They win some and lose some, but this all feels like a long time coming since both Glenn and Abraham met Lucille roughly a few decades ago when that episode aired and all we had to be mad about was a long cliffhanger. Those were simpler times, weren't they?

So what does this have to do with killing off Rick? Well, for similar reasons, his character arc has been frustrating to watch for some but not entirely surprising. We know that Carl went out as a way to heavily push the notion that everyone needs to think about life after the war, and about what happens next. That much becomes clear to the viewers much faster than the characters themselves. After nearly 8 years of watching this show, fans are grappling with having knowledge of where Rick's head needs to be while watching him actively move in the opposite direction.

Carl wanted his dad to once again become what made him a good guy in the first place, taking chances on people and doing the right thing, but on screen, Rick is lying and killing members of the Saviors who were totally down with defecting to his side. It was more of an act of vengeance for a grieving father facing a bitter conflict that has cost him a lot. All things considered, it was always going to take him a while to get to the point where the Carl narrative has wanted to push him, thanks to the show's frustrating pacing, but waiting for him to get there and the storytelling in between hasn't helped much. As a side note, I'm not suggesting that Rick should have just grieved and rationalized all of this faster as a character, but for how much time is passing in the show and the amount of hours the season covers that time in, one can easily feel like everything is moving at a snail's pace.

Personally, I'm glad that this war is blurring the lines for some of our characters. Rick is pushing towards the not-so-good side, tetering closer and closer to his own brand of villany, while Negan, who was the most evil son of a bitch we could imagine for a while there, starts to become more of a sympathetic and reasonable figure over time, especially with Jadis this past episode. That kind of thing honestly makes this one of the better story arcs of the show, even if the pacing is slow and we are in desperate need of new scenery. Can we get some snow zombies, already? I'm looking at you, Nictotero. We all know this is the real solution to all of these problems.

Putting my unreasonable demands aside, let's assume that the magic recipe is, in fact, the death of Rick. Who are we really left with of any relevance to fill those shoes and bind everyone together? The show doesn't need to start following Daryl, who's got as much depth as a kiddie pool in recent episodes (can we get him back to being interesting again?), or any kind of strange reboot jumping ahead to a grown-up Judith in her own brand-new story. That's not what The Walking Dead is about or where it's heading. Rick is the glue of this story and it goes where he goes. We've been following him for so long that it frustrates us to watch him veer off of the path that got him this far, but that's part of the narrative which has moved the show into a grey area that it might have lingered in just a little bit too long. There's been some good in that grey area, though, whether or not you think the series just needs to wipe the slate clean because of it.

There's no doubt that The Walking Dead needs to change things up to get fresh again, which may very well happen next season under its new showrunner. However, killing off Rick Grimes would not save the show or open up a better future for it. That would simply mark the end of it, whether it tried to keep going or not. Please stop trying to kill off Rick in your Walking Dead takes.