Illusions, paranoia, corruption, and tentacles aplenty invite you to join the Black Empire as it seeks to rise again.

World of Warcraft has been known for many things throughout the years. From the undeniable sensation behind the peak 12 million subscribers of its Wrath of the Lich King glory days to the fun pop culture ribbing offered by the likes of South Park, the genre-defining massively multiplayer online RPG has been a topic of video game discussion since its release in 2004. Despite its cartoony art style, it’s no surprise that the title has dipped into horror elements here and there over the years.

The most recent such example is the latest content update for the current Battle for Azeroth expansion, titled “Visions of N’Zoth.” Much like its previous eldritch counterparts, N’Zoth is a Shath'Yar, otherwise known as an Old God to most denizens of the game’s world. These creatures are inspired by the Cthulhu mythos of H.P. Lovecraft and embrace all of the familiar, creepy traits that come with the territory. Tentacles, extra eyes, gaping maws, and other horrific imagery have been running themes for Old Gods in this game, and this latest iteration does not fail to deliver in that regard. 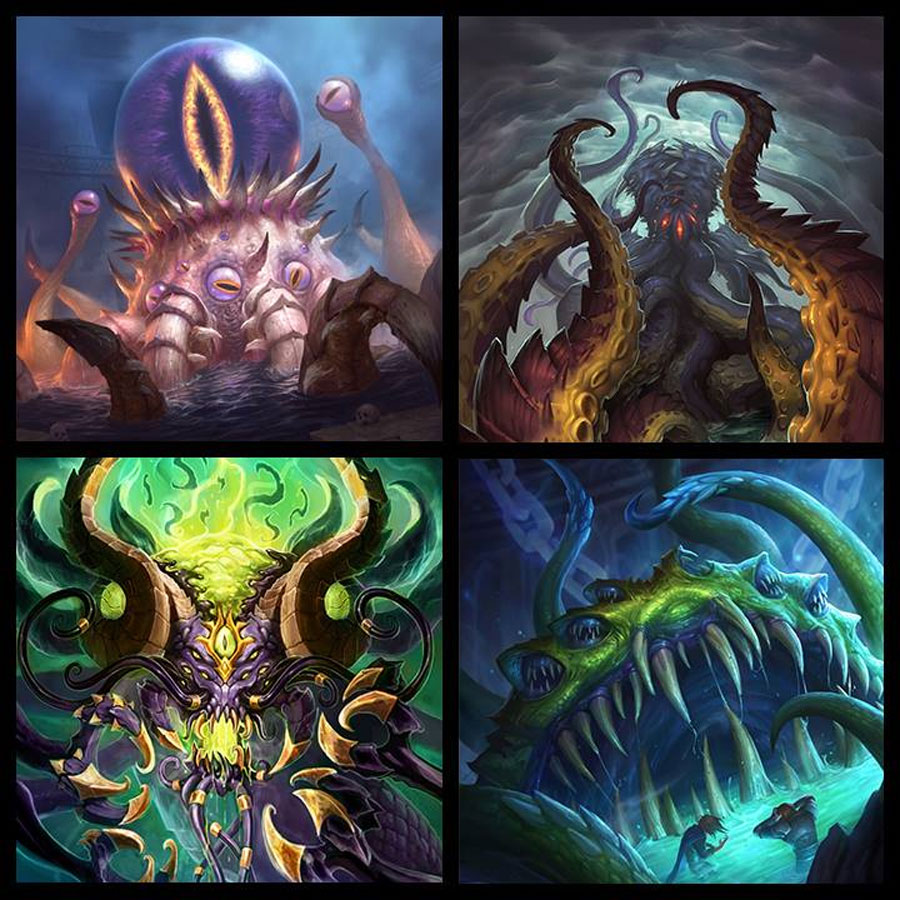 There is plenty of deep lore surrounding the presence of Old Gods and their Void-realm masters, but you should know that their overall aim is to find and corrupt planets containing world-souls, a term which ties deeply into the cosmic origins of the universe in WoW. Born of these world-souls are Titans, a race of colossal beings who hold the power of creation itself. Azeroth, the planet on which the game takes place, is the last such world-soul and thus our heroes must fight to protect it at all costs.

In the current story, N’Zoth has been released from its ancient prison beneath the seas and seeks to corrupt and reshape the world as we know it, bringing about the return of the Black Empire—what the Shath'Yar once called their regime over the planet when it was ruled by their darkness. However you may feel about the gameplay or the state of the title’s longevity in the online gaming space, there are a few very cool horror-driven aspects of this story.

Corruption, insanity, illusions, and paranoia are at the forefront of N’Zoth’s arsenal in its campaign against Azeroth. Who can you put your faith in if you can’t trust your closest allies? This is reflected both in story moments as well as through gameplay mechanics. An example of the latter is how any newly-collected gear can become corrupted, providing added power benefits at the cost of succumbing to just a teeny bit of the Old God’s corruption, which comes paired with various drawbacks the more you have.

To top it off, the Lovecraftian elements and overall corruption are abundant out in the world throughout the new content, including being tasked with adventuring through twisted visions of N’Zoth and the brand-new raid, Ny’alotha, The Waking City, both of which are all about taking the fight to the Old God with the power to resist its influence—to some degree. It wouldn’t be much of an adventure if the heroes couldn’t win eventually, but that’s still an ongoing fight for most Azeroth’s everday player base.

WoW has always been peppered with its fair share of darker themes, such as undeath and by extension the playable Forsaken race of characters, but the Old Gods have traditionally brought the horrific imagery front and center. While the game’s lore is no doubt full of plenty of grey areas and morally ambiguous villains, battling the bad guy is usually more cut-and-dry when standing face to face with a monstrous creature such as N’Zoth, or its previously-dealt-with counterparts, C’Thun, Yogg-Saron, and Y’Shaarj. We may even see some of those names pop up again in the future, especially with the upcoming Shadowlands expansion set to take players into the literal afterlife of this universe.

Visions of N’Zoth once again takes World of Warcraft and makes it go full Lovecraftian with great thematic and aesthetic results. Your gameplay mileage may vary, depending on what kind of content you are into, but there’s no denying the solid horror influence behind many of the locations and imagery present in this new update. It's a nice change of pace.

For those who have been following along with Blizzard’s all-time-great MMORPG for the better part of two decades now, there should be an intimate familiarity with the more horror-driven aspects of the game’s lore. Others, however, may be surprised to see this kind of thing coming from a title known for its adventuring and cartoony art style. Now if you’ll excuse me, I have some tentacles to fight off and a planet to save from horrific corruption. Until next time!