With the war over, where do our characters go from here? 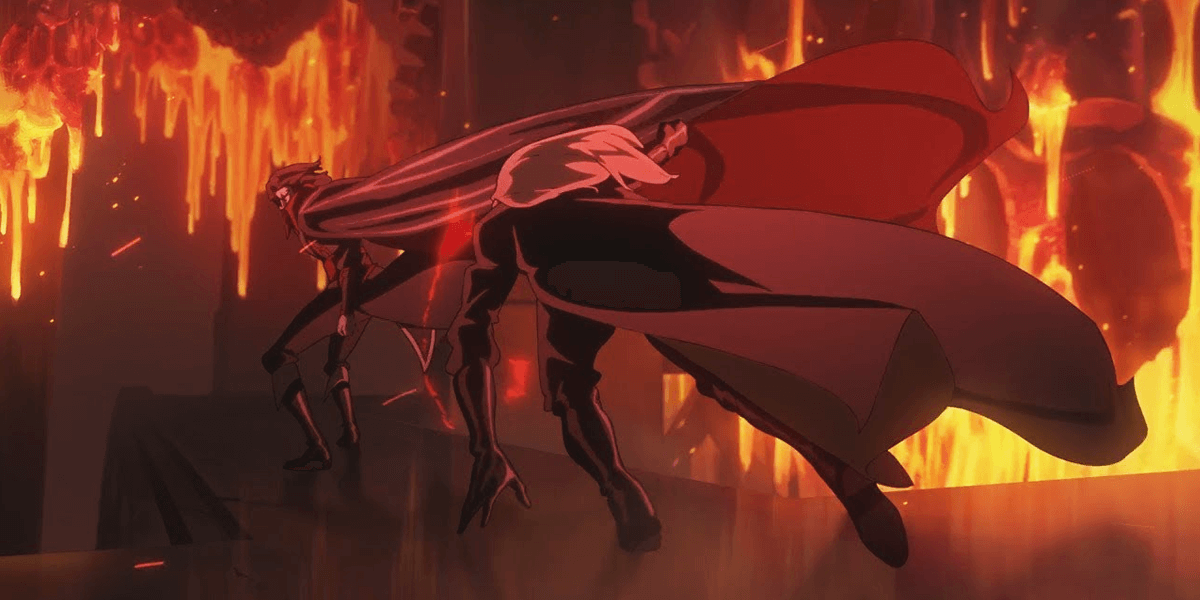 The war is over. Dracula is no more, but the story doesn’t end there. Alucard walks through the place where he grew up, now in shambles. He and Trevor in this moment finally reach a mutual understanding and respect for each other, as Trevor makes him an offer. His words strike true as Alucard gladly changes his mind and accepts. It is a great scene that shows how far the two have come since their first meeting last season, though don’t think for one second that the animosity has completely gone away.

Isaac, cast away back to the desert, wonders what his next move shall be as he is happened upon by a group of wanderers on horseback, who aren’t the friendliest. Reaffirming his hatred and distrust in humans, Isaac makes up his mind and begins building a force of his own. His end game isn’t laid out completely, but anyone familiar with the lore behind him can take a guess of what happens next.

Sypha feels like she has been given meaning and it invigorates her, as she doesn’t wish to stop. She reaches out to Trevor on every level because, deep down, she knows she has to be with him. Her sense of adventure and quest for more knowledge is undying, and she believes Trevor feels similarly. In a way, he does. As a man with no living relatives or ties to anything other than a family of legend, he realizes that his life would be empty if he were to run from his destiny now and leave Sypha behind.

Hector, however, did not fare as well as the heroes or even his ally, Isaac, as he is thrown on to a path of pain and misery. Still in Braila with Carmilla and what is left of her forces, he doesn’t realize that his fate, for the moment at least, has been decided for him. Carmilla’s cruelty is on full display here and Hector is powerless against it as her plans continue to unfurl. We definitely have not seen the last of her.

The three heroes say their goodbyes and finally go their separate ways. Alucard retires back to the castle and takes his place in his father’s study. A part of him shattered as his memories become a device of torture to him. While he has always been a character that seems more at home when alone, it also seems that is when he is at his most vulnerable. His pain is conveyed beautifully, poetically in the same room and chair where his father shared similar pain. With no companions to occupy his thoughts and time, he is doomed to live in his head, filled with the memories of his past.

As the war comes to a close, we are given some great moments between our characters as well as some initial setup on what may come in the next season.

This chapter is over but there is still a lot more story to tell. We are given a few hints at what may come but nothing too concrete as we look ahead to the third season.

While season 2 might be over, fans can rejoice in knowing that the third has already been ordered. The first two seasons of Castlevania followed the story of the Nintendo Entertainment System classic, Castlevania III: Dracula’s Curse, and while it added and subtracted from that base story, including the removal of the fourth party member, Grant, it still followed the story very closely.

Overall, it was a fantastic visual representation of one of the earliest Belmont adventures, while making note of the only other noteworthy canonical Belmont to come before Trevor, Leon from Lament of Innocence. Gabriel's story was forgettable while Sonia Belmont was wiped from canon long ago.

Fans can expect the series to continue for quite some time as Belmonts such as Simon, Richter, Juste, and Christopher all have their own stories to tell, not to mention we likely have not seen the last of Trevor just yet. Here's hoping we get season 3 sometime next year.