This happy-looking anime game is not quite what it seems. 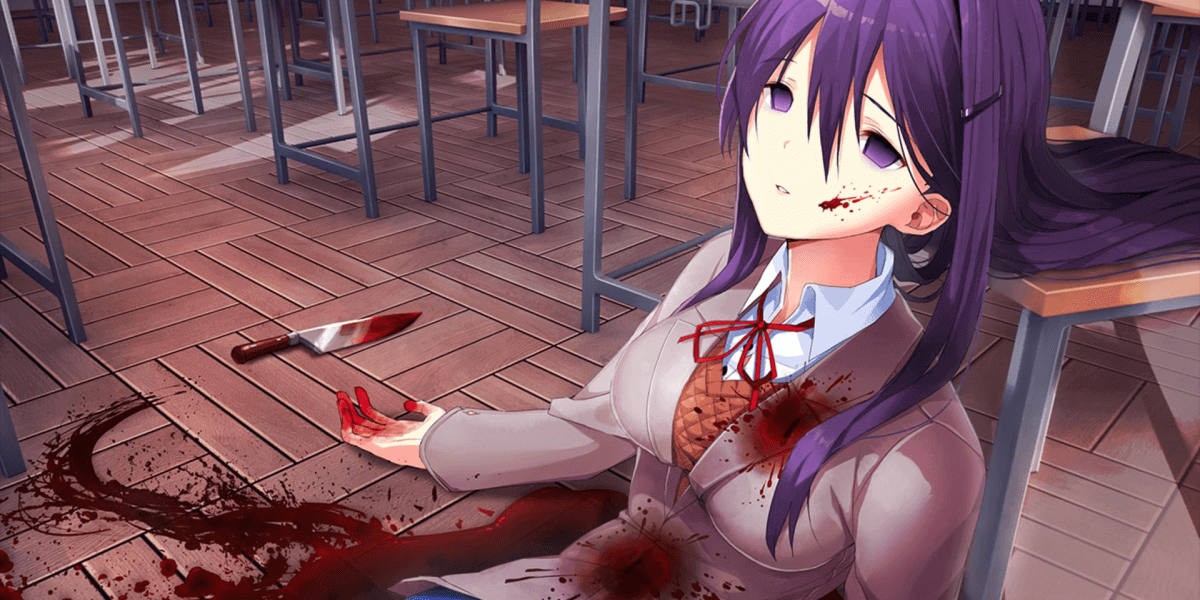 If you’re a PC gamer, you most likely have a library of games on Steam, PC’s largest gaming platform, and if you browse through Steam enough, you’re bound to see a plethora of visual novels. Aside from all the usual drama and romance of this genre, Doki Doki Literature Club takes a rather drastic and unexpected turn.

The backbone of this game heavily relies on a lot of romantic anime tropes. A boy gets introduced to an entire cast of girls, who all fight for his affection, and he ultimately has to chose one of them. The first two hours of the game is what you’d expect from a visual novel. Most days in-game feel like a poetry simulator, but instead of physically writing, you chose from a large assortment of words and each of those words gain favor with one of the game’s females. Select enough of the right words that focus on one character in particular and you start to win their affection. 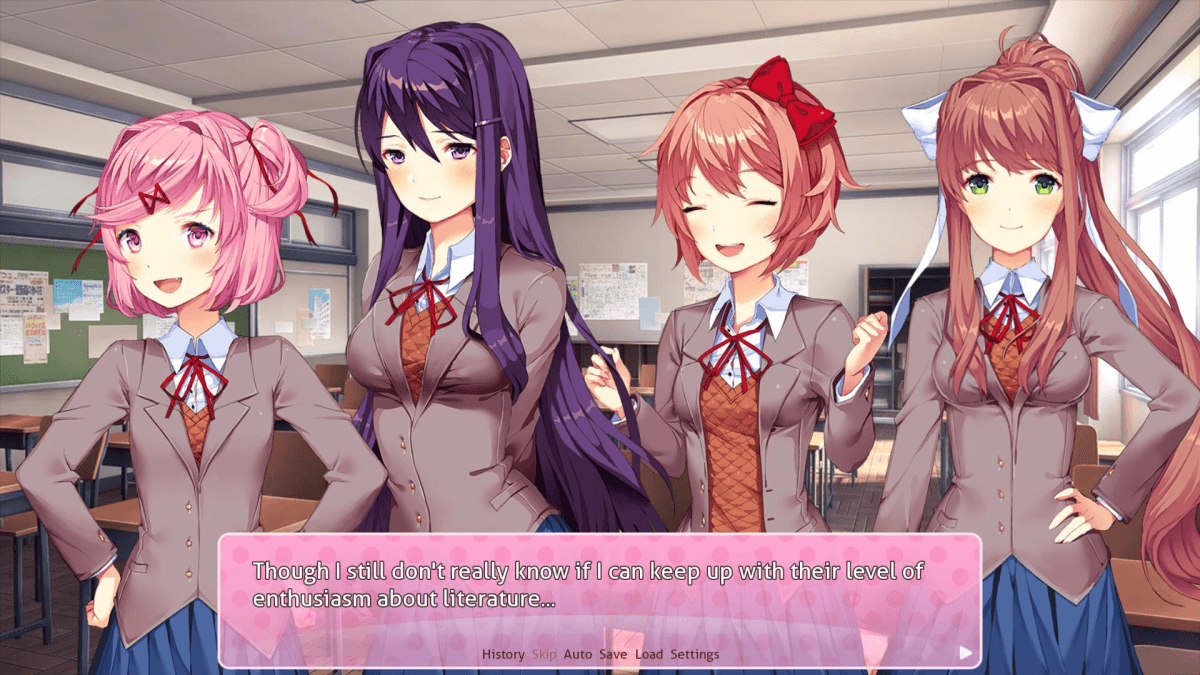 The game takes its first twist when you have to start working on a project for a festival. You’re tasked with deciding which classmate’s house you want to go over and work with. This causes a bit of an uproar with the other females who all want you to spend time with them. This event occurs more than once and things start to get darker and violent from there.

Suddenly, it’s revealed that your best friend suffers from depression. She has been battling it her whole life and she’s getting worse. You can choose to blow off your classmate to spend time with her, and doing so, things seem to get a lot better - until she doesn’t show up for literature club. You decide to visit Sayori after school and in her bedroom you find her, hanging from a noose. At this point in the game, I didn’t realize that the usually loud and happy music of Doki Doki Literature Club had slowly muted itself right before hand, following a loud and shrill return upon entering the bedroom. 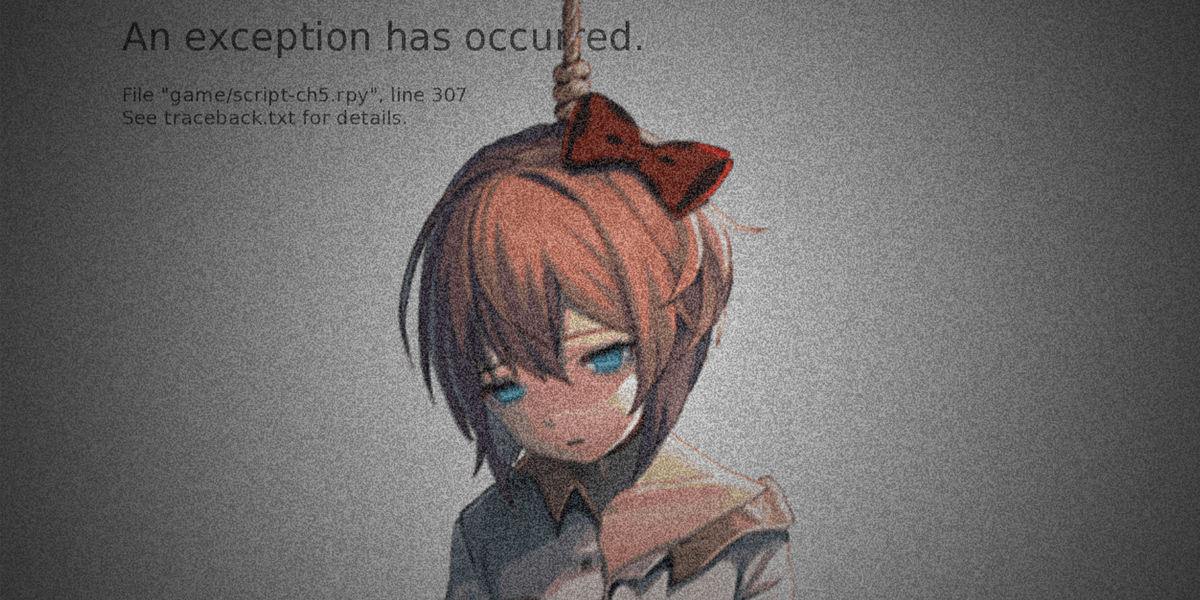 This is when the game starts to fuck with you.

I clinched the arms of my chair. The shock mixed with the abrasive sound did its purpose well. Seeing Sayori hanging there made me feel sick to my stomach. I had to close my eyes and take a few deep breaths to regain my composure. After the dialogue finishes, the world briefly goes back to normal, until you start to see things that couldn’t possibly be there. Music starts warping at random and unsettling comments keep getting made. Is this in all in my character’s head or is something more sinister at work? The game begins to glitch. It’s subtle at first but as you progress it begins to get more erratic. You try to continue the path you set yourself on, but it starts to gets increasingly difficult. Your classmates are more aggressive. Yuri starts to cut herself, her timid nature is replaced with a hyperactive-obsession with the player and an uncontrollable urge to self harm.

It becomes increasingly clear that things in the game are being manipulated, but not just for the story’s sake. You literally have files from the game erased from your computer. As the horror that befalls the classmates comes full circle, you’re met with some dialogue from Monika, and the game ends. Did I beat it? What that the whole game? I was dumbfounded with how abruptly it all ended, but a change in the title screen let you know that something wasn’t quite right. I felt that I needed to play it again, since surely this couldn’t have been the end.

The story begins, almost identical, but one classmate ceases to exist. The story attempts to continue on, but the game becomes unstable. The dialogue becomes unclear and the world diminishes around you. It’s at this point you’re been notified that you’re in a game and Monkia is changing the files so it’ll just be you and her. This whole time I felt Monika was a bit pushy, maybe obsessive, but no, she wants you. She needs your attention. 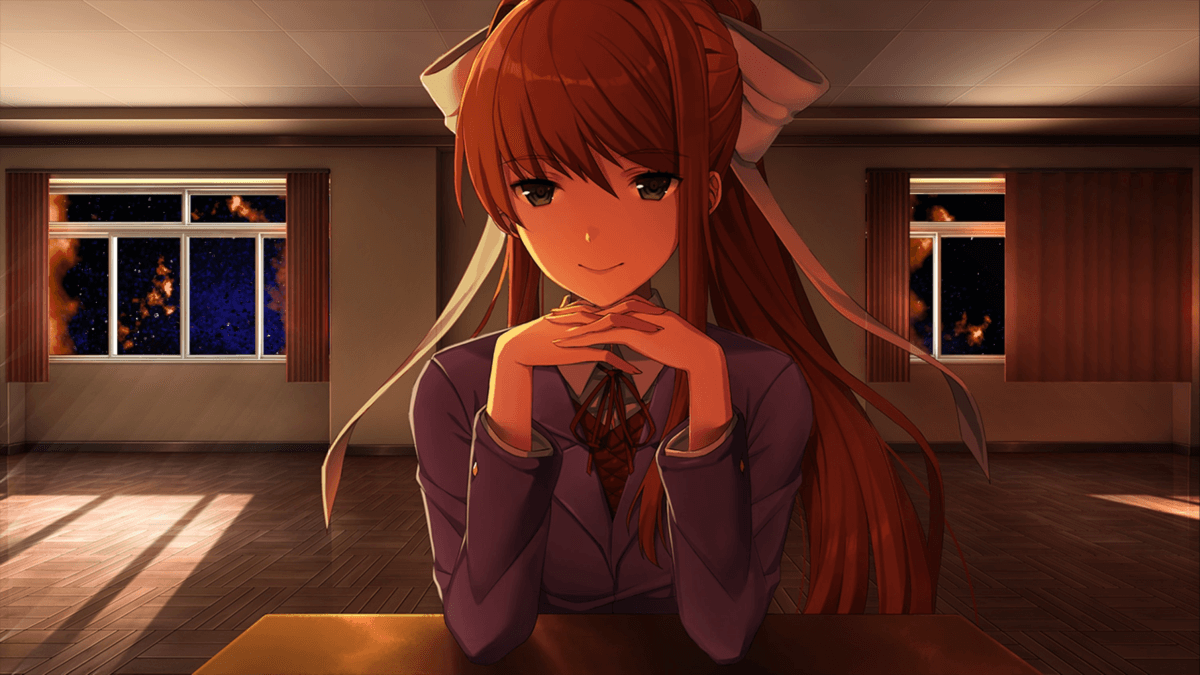 The game comes to the conclusion after a one-on-one sit down with the antagonist. If you’ve decided to name your character something other than your name and your Steam name happens to be your real name, this is where it gets intimate. Monika knows she’s in a game. She knows that you’re playing on Steam and she calls you out, not by your in-game name, but by your Steam handle. I was taken back. Breaking the fourth wall is one thing but calling you out by your account name is another. It made the hairs stand up on my arms and the thought of being watched crawled through my mind.

The game delivers psychological horror on varying levels though its music and character and text manipulations. You have different choices you can make, giving it replayability, and you can even experiment with your own game file manipulations to get a few interesting scenes.

Though it’s already a short game, the first couple of hours are a basic visual novel and might be too slow of a burn for players to stick around for the dark parts. Scenes of graphic violence mixed with unnerving music might be too much for people suffering with depression, anxiety, or suicidal thoughts.

Doki Doki Literature Club is a very unique experience. It really gets under your skin and and breaks your heart on more than one occasion. I personally don’t recommend the game to someone who battles with serious depression or anxiety, but if you’re brave and think you can handle it, give it a shot. After all, it’s completely free on Steam.