This buyer got more than he bargained for in a yard sale purchase. 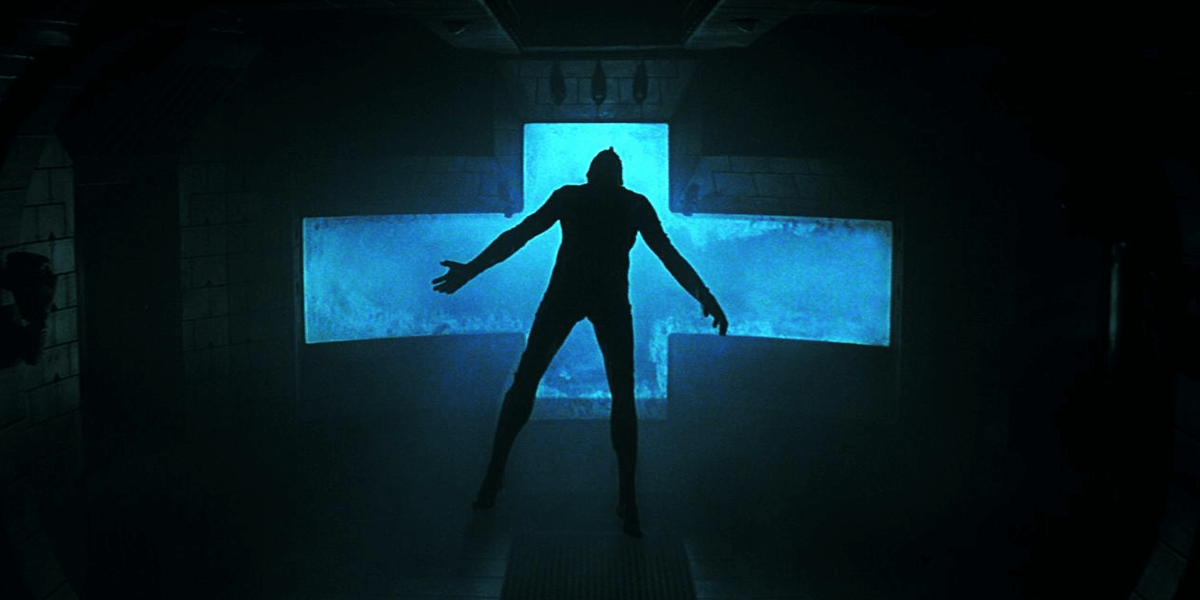 You’ve probably heard of this 1997 science-fiction horror film and, if so, you should be able to easily recall the scene where the crew of the Lewis and Clark viewed footage of what happened aboard the Event Horizon when it crossed over into the Hell dimension.

For the sake of realism, the cast and crew actually filmed there, which was a huge and stupid mistake all around. Only a handful escaped with their lives before they thankfully bounced back into this dimension. Well, as one would expect, it was a pretty shitty time and a great deal of awful events unfolded, which was all captured on film.

Since the footage contained actual obscene acts of sexuality, brutality, and death, most of it was completely unusable in the final theatrical cut. Due to the fact that nearly all of the actors playing the ship crew died in this foolish dimension jump, with the exception of Laurence Fishburne, the filmmakers had to recast the movie and opted to alter the story to follow a different crew in search of the Event Horizon and her crew. The snuff footage in its entirety was stored away on a single VHS tape and forgotten about for years.

When Lloyd Levin, one of the film’s producers, and director Paul W.S. Anderson became increasingly interested in including more of the Hell dimension footage in a collector’s edition DVD release, they couldn’t find the tape. After years of searching without much luck, the two just assumed the footage was irretrievable and gone forever. That is, until now.

This past weekend, an unwitting buyer at a local yard sale purchased an unmarked VHS out of sheer curiosity and came across the lost footage. The man who sold it to this individual also had no idea what was on the tape and mentioned that he found it while doing renovations in his basement and was hoping to sell it for dirt cheap. Interestingly, the seller’s home once belonged to Fishburne, who played Captain Miller in the finished movie while he played Dr. Wier in the original version.

“I called the police because I thought it was a murder tape,” explained the buyer, who cannot be identified due to a publication ban. “It had all this screaming and people who were covered in excessive amounts of blood. At one point, they all inexplicably started having sex and began slitting each other’s throats.” The buyer grabbed for a handkerchief and began sobbing loudly into it. Clearly, this individual was still quite traumatized from the experience.

We then viewed the footage for ourselves and, well, this shit is pretty messed up. In the footage, we have the poor crew of the Event Horizon being impaled by large knives while some are blown out of an airlock and another is skinned alive with a vasectomy being haphazardly conducted on them.

The commanding officer of the ship also rips his own tongue out and feeds it to the ship’s doctor to cap off this assortment of wildly bizarre scenes. One scene that stuck out to us was Fishburne smiling as he decapitated one of his fellow crew members, indicating that he loved being in Hell. It’s unknown whether this line was in the original script or not.

“I vomited out my dinner when that one eyeball guy reached into a toilet and started eating shit,” continued the buyer, who sat down on his sofa after feeling dizzy. “I understand that this is a movie but what kind of fucked-up person do you have to be to take enjoyment from watching this crap?”

At press time, the buyer was apparently in contact with Laurence Fishburne, who is mysteriously interested in purchasing the tape for an undisclosed amount of money. It’s expected that the buyer will be very happy to get this dreadful item off his hands and recoup the 50 cents spent on acquiring it.