This is Definitely What Happens to Rick Grimes

Here is the shocking truth behind The Walking Dead's big exit. 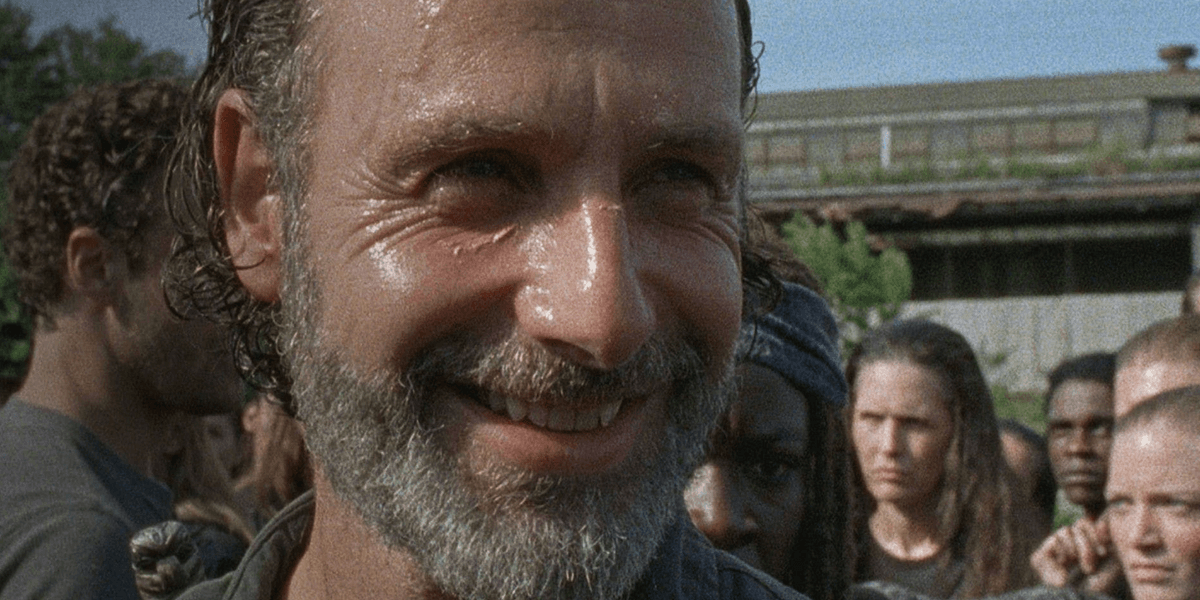 The season premiere of The Walking Dead is nearly here and The Rotting Corpse has landed a totally exclusive bit of news on what will happen to Rick Grimes midway through the season. Stop reading right now if you don’t want to be spoiled on what definitely happens to this beloved character that we have followed for decades now. This is a serious warning!

For this incredibly special event, AMC has extended the eighth episode in the season, titled “Evolution” to a full 2-hours in length. It begins immediately with the title credits, which will be changed for this one particular episode, not to be confused with the new title sequence for the other season 9 episodes, exploding right into Drowning Pool’s “Bodies” accompanied by a montage of Rick Grimes blasting down literally every walker he has killed throughout his glorious run on the show.

The final shot in the opener shows Rick teary-eyed as he eats from a huge can of chocolate pudding over his son’s grave. We watch him eat the entire contents in the can, which takes about 5 minutes. Wow, that’s pretty moving. Then, the series logo appears and it cuts for the only commercial break for this episode. Sounds like AMC is pulling out all the stops here.

When we return from the break, we are treated to an extended shot of Rick surrounded by his friends and allies. Daryl steps forward and gives Rick a big hug, which is an extended scene and might make some viewers slightly uncomfortable. This buddy embrace ends a long time later with Rick kissing Daryl on the cheek and wishing him good luck.

We can hear sobs coming from the group as Daryl steps back crying in a slow motion shot. The scene is of course complimented with some emotional music by series composer Bear McCreary. Well, that’s really it for that. This was a passing of the torch ceremony, with Daryl now leading the group in this new beginning, but why?

Now here comes the huge plot twist. Rick starts talking with a British accent and announces to the group that he’s been living a lie and that his actual wife and two kids are waiting for him back in London, England. On top of that, he was going by a false identity this entire time and his real name was, in fact, Andrew Lincoln. Whoa! This means that Carl and Lori were never his family this entire time, so what’s going on here?

Andrew reveals to the group that he was on vacation in the United States when the outbreak happened and Lori had just assumed he was her loving husband because he had a striking resemblance and similar personality to the man she was once knew. Her son Carl was too young to understand what was going on and just assumed that Andrew was his father.

As for Shane, he knew all along he wasn’t Rick Grimes but kept it to himself. As fans know, it ended in a confrontation between the pair with Andrew murdering Shane in fear that he’ll expose his true identity to the group. Before departing for good, Rick smooches Michonne and tells her that he’s sorry. He then starts walking away from the group, who are completely in shock and say nothing more.

For the next half hour, we just watch one long shot of Andrew walking to some unknown destination. Spliced throughout the shot are various memorable scenes featuring him under the false identity that he assumed for nearly five years. While it’s quite emotional, we as the audience can’t help but feel bitter as well, considering this man has lead us on for so many years under false pretenses. The shot concludes when he finally reaches a vehicle and then drives off to a place with a boat launch. Upon arrival, he boards a speedboat and begins making his way to the United Kingdom.

The final shot in this episode is him arriving at his home in London and being warmly greeted by his actual wife, Gael, and their two adorable children, Matilda and Arthur. It seems like the outbreak somehow never reached Europe. Before the end credits roll, Andrew makes his final line on the show, “That was a really long and shitty vacation and I’m so happy to be back home.” The camera then zooms out and we see Andrew enter his home with the family and close the door. What the fuck?