Our 7 Days of May special event kicks off with the film that launched the career of Angela Bettis, May.

Reviews
Movies
May
7 Days of May
Events 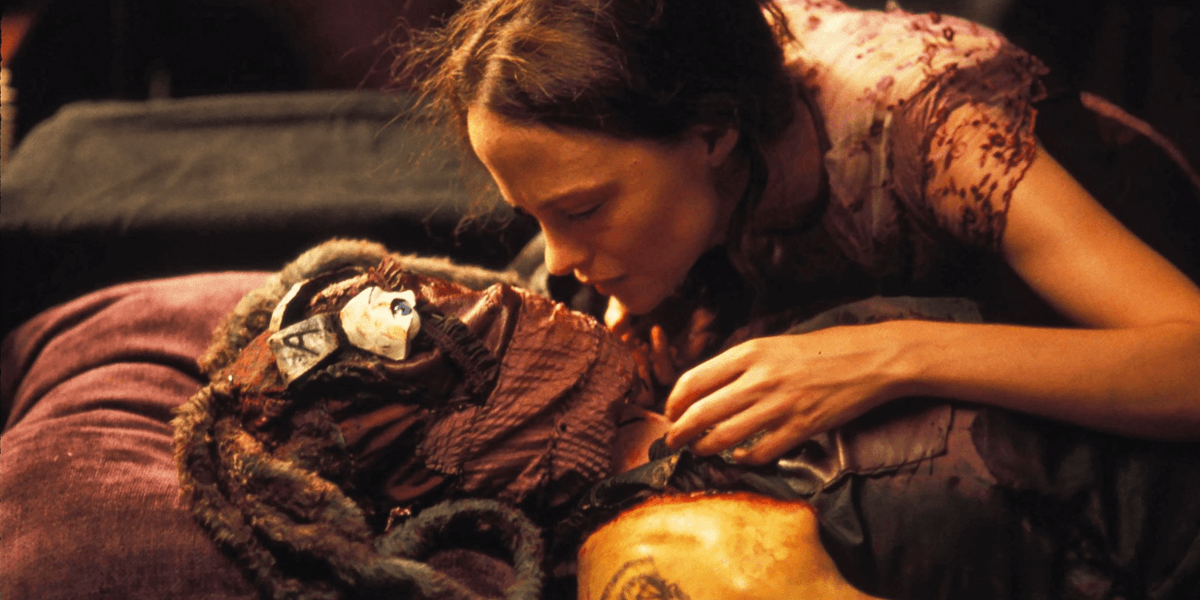 Welcome everyone to the first day of 7 Days of May, where we are going to look at May. Are you still with me? This is the movie that really launched Angela Bettis’ career into the horror mainstream, while simultaneously introducing us to Lucky Mckee as an upcoming director. The pair would work together on numerous occasions over the years, but this was undoubtedly their finest collaboration.

May never had it easy during her childhood, as her only friend was her special doll named Suzie, which was made for her by her mother. As a result, she struggles with basic interactions and social situations. What makes this film particularly special is the inclusion of Anna Faris’ Polly as a companion and pseudo-foil to May, but more on her later.

May is a talented seamstress and awkward stalker. Her movements are stiff and almost unnatural in the beginning, showcasing early in Angela’s career her ability to project through her body and her eyes. It is something to behold. Her changes in character depending on who she is around is a unique addition to the movie and adds some very interesting layers as new characters are introduced. It is almost as if she plays a different character in proximity to each of the other supporting characters.

Being so socially-stunted growing up, before getting bombarded with the prospect of a boyfriend and a girlfriend, as well as some new life changes, creates a maelstrom of emotions within her that she isn’t used to. Mixing that with her penchant for complimenting random body parts, and her tendency to act almost childlike in ignorance and innocence, one could surely see all these things being some kind of volatile cocktail waiting to explode.

Early on in the film, it becomes apparent that May's doll Suzie has quite a bit of influence over her, but so does anyone who shows her any kind of affection. Polly is quite the enabler in that department and she is a hell of a character. Oddly enough, Polly isn’t a character ever mentioned when talking about Faris’ career. Her sexually-charged, smooth-talking persona is such a shock in comparison to the peculiar tendencies exhibited by May, who is instantly drawn in and succumbs to Polly’s advances. May is surely impressionable, but Polly might have stolen the show if it wasn’t for the twisted rate of growth May exhibits, which is wonderfully orchestrated by an inspired soundtrack, helping to establish a perfect pace of story and development.

Her love interest, Adam, played by Jeremy Sisto, helps push her boundaries on human contact with very awkward results, ultimately driving them apart and lighting the spark into May’s final descent. This descent is momentarily stunted with the help of Polly and a decision to volunteer with blind kids, which I wish was explored a bit more. However, things inevitably begin to unravel and it becomes clear what May is really after. She is betrayed by everyone she falls for, be it man, woman, or cat.  Even Suzie begins to turn on May as she goes astray in one of the hardest scenes to watch.

Angela jumps through the entire mood spectrum in this movie, displaying something different in almost every scene. It had to have been an exhausting role to play, as her direction continually changed from scene to scene in such drastic ways. As the final act began, the direction clears up for Angela and she is able to zero in on what she needs to do. Confidence is present for the first time in a character who was childlike for the entire film up to this point. It’s such a fitting turn for May and you can see that Angela is truly reveling in the character in the final act.

The morbid theme stringing this film along for 90 minutes finally boils over and comes to life in the end. May becomes the architect of her own happiness in her own unique way. In some way, you can’t really blame her. Was it her fault that everything turned out the way it did when all of the people around her let her down? Angela’s performance in the end is able to make you second guess yourself when it comes to that question.

The cast stands out the most. The film's soundtrack is creepy and helps pace the movie, as well as the birth of a horror star in Angela.

Further exploration of May's time volunteering with the blind kids would have been a great addition to the film.

When you focus on Angela’s performance throughout May, a relatively unknown name back in 2001 when the movie was released, it’s a shame that she wasn’t given leading roles sooner. Her range and dedication are unmatched so much that this movie made her a staple in horror culture.

The film is nothing short of spectacular with a perfect cast that was used to both enable and teach May. Angela was asked early in her career to dig deep for her first starring role and she pulled out a performance that I personally think no other woman at the time could have managed. With this movie, a new star in horror was born, and a budding friendship between Angela and Lucky Mckee would blossom into more exciting horror projects for the future.

For our final day of our May event, we take a look at the work of Angela Bettis outside the realm of horror.

Does Angela Bettis redeem this film in the end?

We get a little bit of a role reversal for the next installment of our special event celebrating the work of Angela Bettis.

There is such a thing as not enough Angela Bettis.