A Night of "Cosmic Terror" on Set With Fame Cinema

We visited the set of indie horror movie Weird Fiction and it's a film you'll want to see. 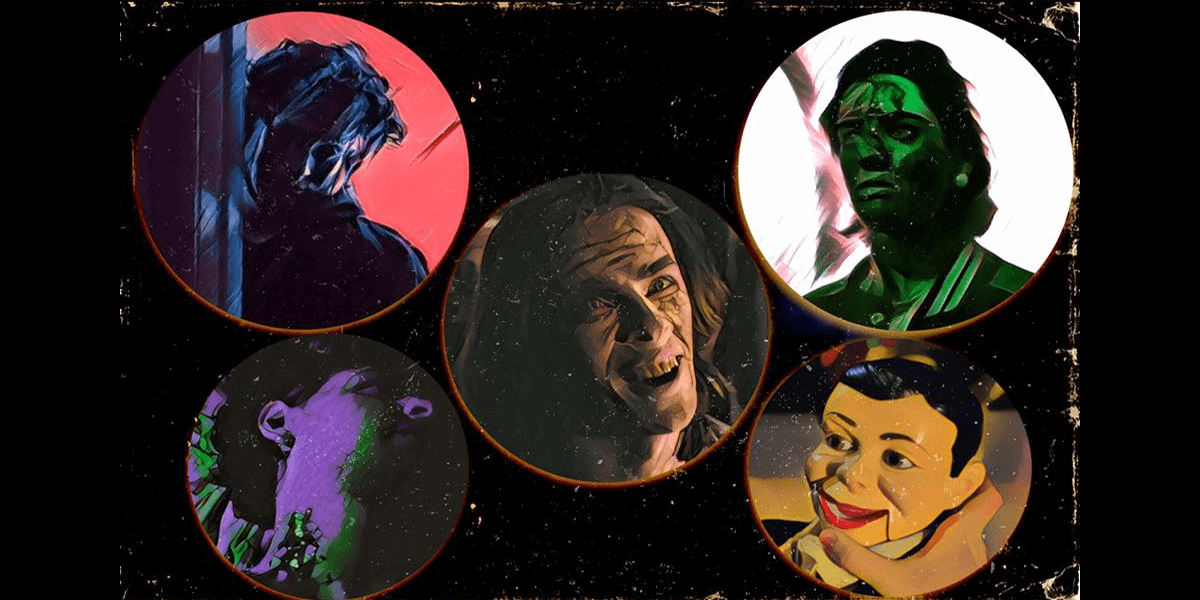 Image via Fame Cinema / CC BY

A few weeks ago, Dead Entertainment was invited by local filmmakers Fame Cinema to come check out a night of filming for their indie horror film, Weird Fiction. The movie is an ambitious horror anthology described as "a loving throwback to retro horror, featuring four different tales of TRUE terror." The basic premise is that four "lost" episodes of an un-aired, underground Halloween special from the past have been found and are being brought to light. I was surprised to learn that the shoot for that night was no more than 10 minutes from my home in rural Pennsylvania, so of course I had to dig out my press pass and notepad to go check out the horror movie being filmed practically in my backyard!

When I first arrived on location, Fame Cinema's number-two man, actor and producer Taylor Rhoades, was waiting to meet me. I parked my car and proceeded to follow him through the woods, and even some swampland, eventually coming to a run-down cabin straight out of Evil Dead. There was even a deer head mounted on the wall inside, which was visible through the window.

Rhoades gave me a quick run-down on the filming plans for the night. The scenes being shot were for the final segment of Weird Fiction, titled Cosmic Terror. Rhoades described it as "a demonic possession film, except with aliens." The basic plot involves two sisters who find a meteor filled with blue goo. They take the rock and, as one can expect, become infected, setting up the horror to come. While I didn't get to see the final alien monster that night, as those scenes had not yet been filmed, Rhodes did describe it a bit to me and that he planned to don the suit himself. Heading inside, I saw director Jacob Perrett and quickly introduced myself in between scenes.

The first thing that struck me about Perrett was his level of professionalism. You never know exactly what you are walking into when you arrive at these kinds of small film shoots. Often times they can be an absolute shit-show of disorganization. That was certainly not the case here. Perrett knows his trade well and effortlessly handled every detail of filming to his liking, from the positioning of the extras to the use of ambient lighting. No detail was left out. He also had some fairly expensive filming equipment you don't often see out in the wild.

Rhoades' wife Danielle acts as Perrett's personal assistant and was assistant director of Cosmic Terror. She was zipping along, helping with everything from grabbing equipment and adjusting set pieces to even doing the segment's special effects and gore. There were numerous other members of the cast and crew I met as well, such as the on-set electrician in charge of swapping out the lighting, the field producers who had scouted out the location we were in, and even the set designer.

Perrett and Rhoades had assembled a small but dedicated A-Team of passionate filmmakers to back them up and they all worked together like a well-oiled horror-movie-making machine. Also, a special shout out to Matt Nale, an actor, writer, and filmmaker in his own right, as well as one of Perrett's top proteges. He had some very insightful thoughts on indie film making and his scene in Cosmic Terror was hilarious.

The first scene I witnessed being filmed involved a bathroom where two lovers enter for some privacy during a big party. However, by this point Paige (Rylee Prenatt), one of the sisters from the beginning, has already been infected with the alien virus and ends up throwing up blue blood (made out of Karo syrup and blue dye) right into Garrett's (Colten Phillips) face. This scene was painstakingly filmed several times by Perrett until one particularly good take saw Prenatt literally spit the gore directly into Phillips' eyes and mouth, eliciting a particularly genuine reaction.

It may have taken several tries, but the final result was absolutely worth it and will likely be one of the segment's most memorable scenes to viewers. I was also impressed that Perrett utilized some very smart filmmaking techniques, such as shooting the same scene but from several different perspectives and focusing on close-ups of each actor as well as external shots of them. This will give him a lot of creative freedom during the editing process when putting together the final cut. The other thing about the "bathroom scene" which really stood out was the choice of green lighting. It gave the entire sequence a very creepy 1980's vibe that, when matched up with the blue blood, caused it to appear to glow as it was splattered all over the actors' faces and bodies. Overall, it was visually stunning!

The next part of the night is where things started to get really interesting. I soon found myself straight out of a scene in Romero's Day of the Dead as the now-zombified couple in the bathroom bursts out and attacks the other party goers, sending everyone into a full-on panic. Actors were tackling each other to the floor, ripping out their victim's neck (with some impressive special effects courtesy of Danielle). The whole cabin was shaking during the "massacre" and at one point I thought the foundation might give way. People were screaming bloody murder and running in all directions as blue blood splattered in all directions.

Additional shots saw people running outside to escape, as well as a mass of zombies pouring into a side room to devour more unsuspecting victims. There was a small window during the initial massacre where I forgot I was on a movie set and actually scanned around the room I was in looking for a window to possibly jump out of. It was only when director Perrett yelled cut did I remember it wasn't real, and this is coming from someone who has been watching horror movies since he could crawl. I was actually shocked that my desensitization from so many horror films didn't hold up, even if for a few brief moments.

While the party massacre was something to behold, the part that stood out the most for me was the final scene shot that night in which another party-goer Tiff (Rose Spencer) wakes up after having been bit on the neck at the beginning of the attack sequence. Laying on the floor, she suddenly jumps up and is immediately pursued by a horde of the alien undead, who chase her into the bathroom. The zombies then proceed to beat on the door repeatedly as she screams, before finally losing interest and dispersing.

That particular sequence really took me back to one of my all-time favorite zombie films, Romero's Night of the Living Dead. It was very reminiscent of the later scenes in which the cabin was surrounded by zombies, all beating on the doors and windows trying desperately to get in. I stood off to the side the entire time with Taylor Rhoades, both of us having huge grins on our faces. We looked at each other and, without saying a word, knew we were thinking the same thing: that there was something legitimately special unfolding before us. The same could be seen among almost everyone else involved, including director Jacob Perrett. Cosmic Terror was actually terrifying!

The entire night on the set of Weird Fiction's Cosmic Terror was no more than three hours total, but the planning and execution by the team at Fame Cinema means they made every shot count. Honestly, the level of professionalism executed could perhaps rival actual movie studios. One of the best parts of the experience for me was the atmosphere on set. Fame Cinema is a close-knit group of friends who love what they are doing and it was absolutely infectious (no pun intended).

Each member of the main cast and crew I had a chance to meet were super-excited to be there and gave the film their full effort. Even their friends playing the extras were having a great time. There was even a point where we all ended up singing "Rockstar" by Smash Mouth to pass the time during a short break. Nothing can beat such a positive vibe, although it was almost comical at times considering we were there to shoot a horror movie. You would think that the set might feel dark or bleak, but that was far from the reality of filming Cosmic Terror.

Jacob Perrett's Fame Cinema is doing some amazing things out here in the middle of nowhere, Pennsylvania, so it's definitely a name you'll want to remember. They just launched their Indiegogo campaign for Weird Fiction, so you can pledge for your very own copy starting today. Also, Dead Entertainment will be provided a review copy soon, so keep an eye out for our official thoughts on the full Weird Fiction anthology. 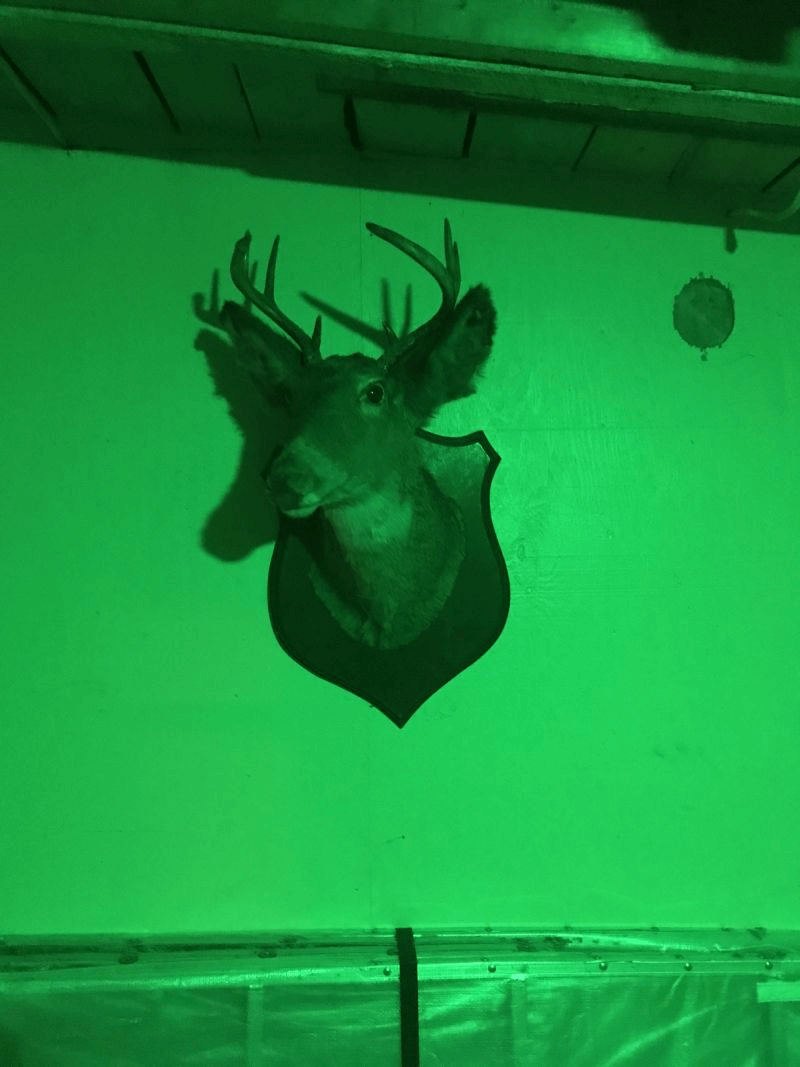 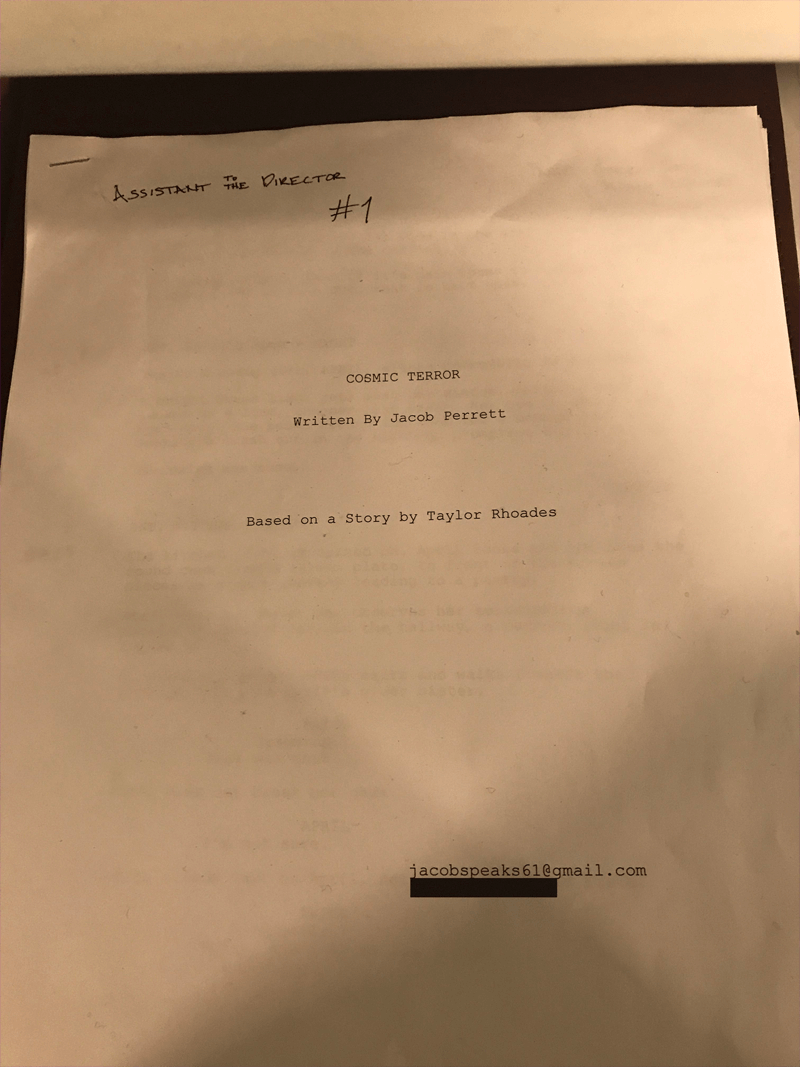 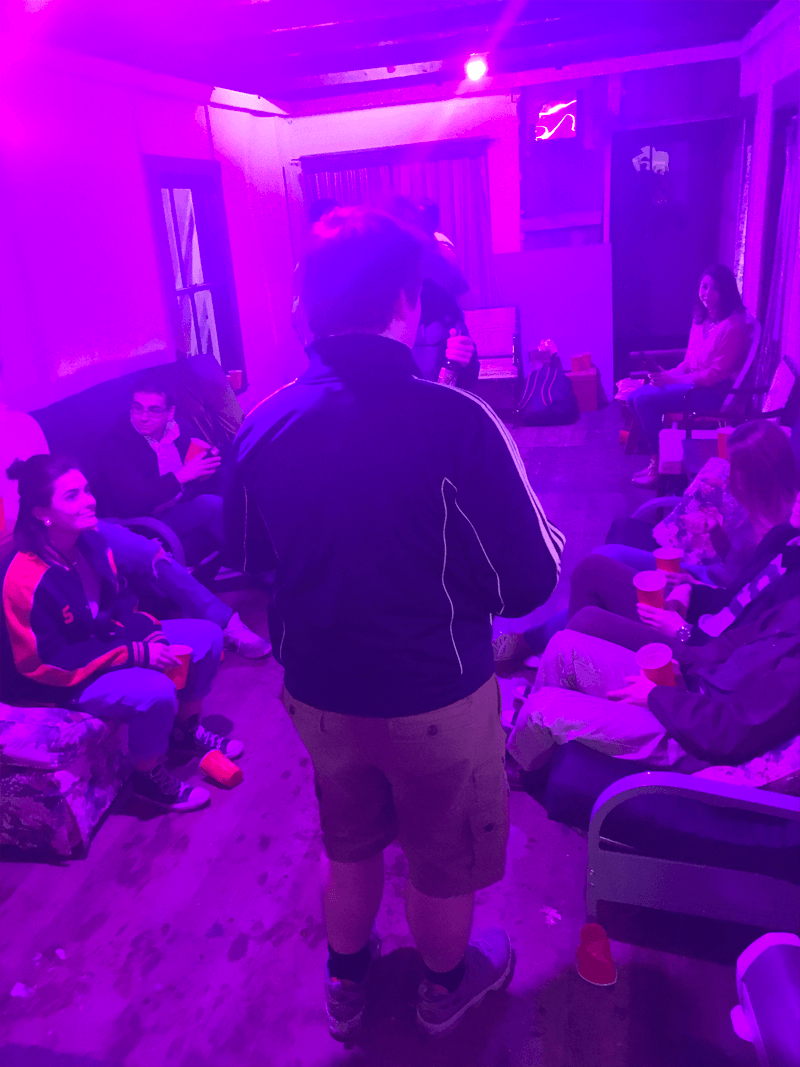 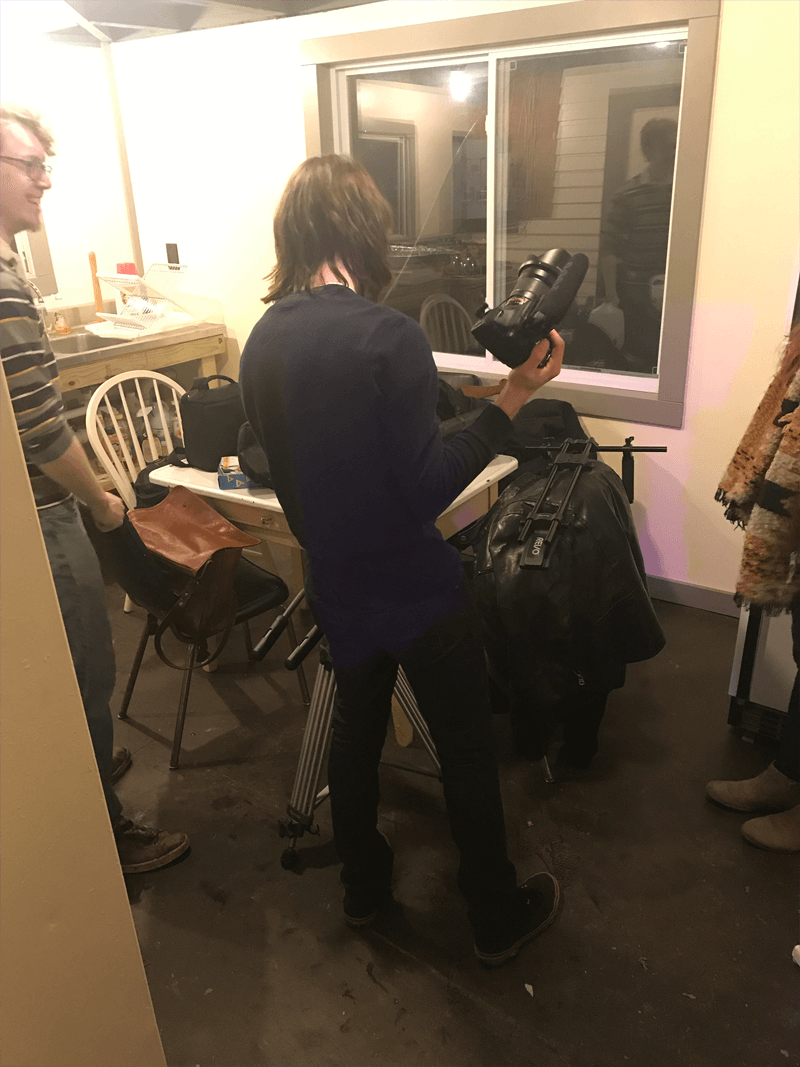 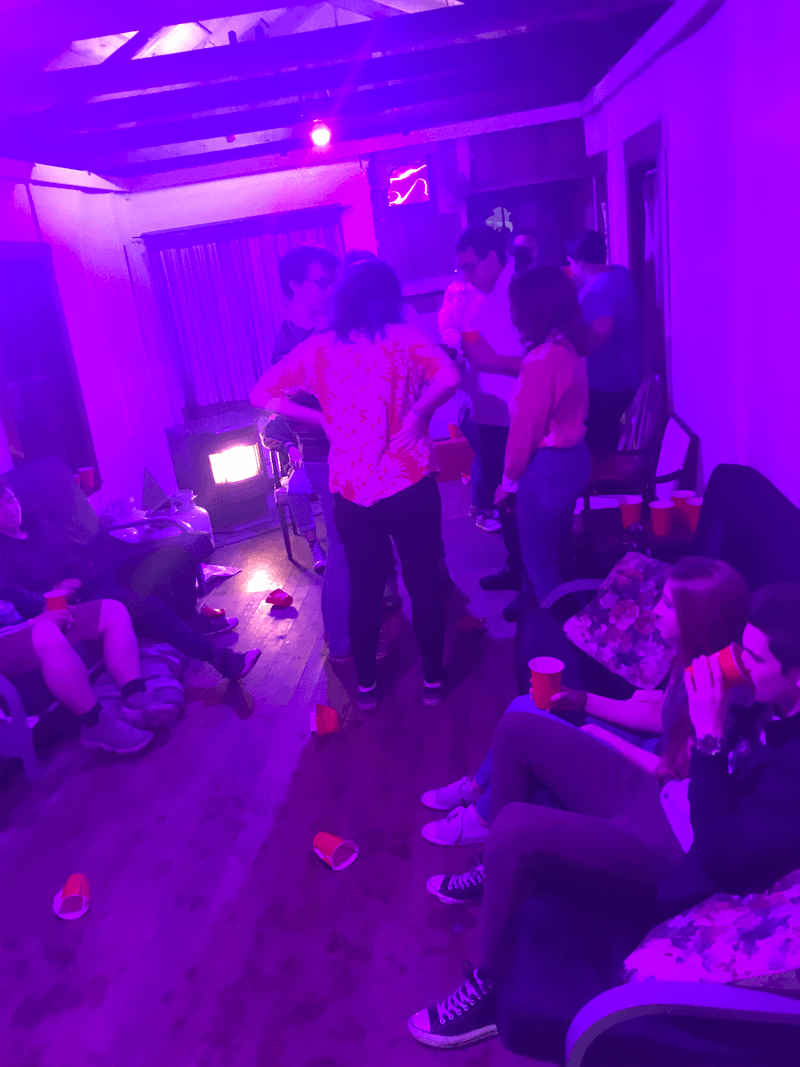 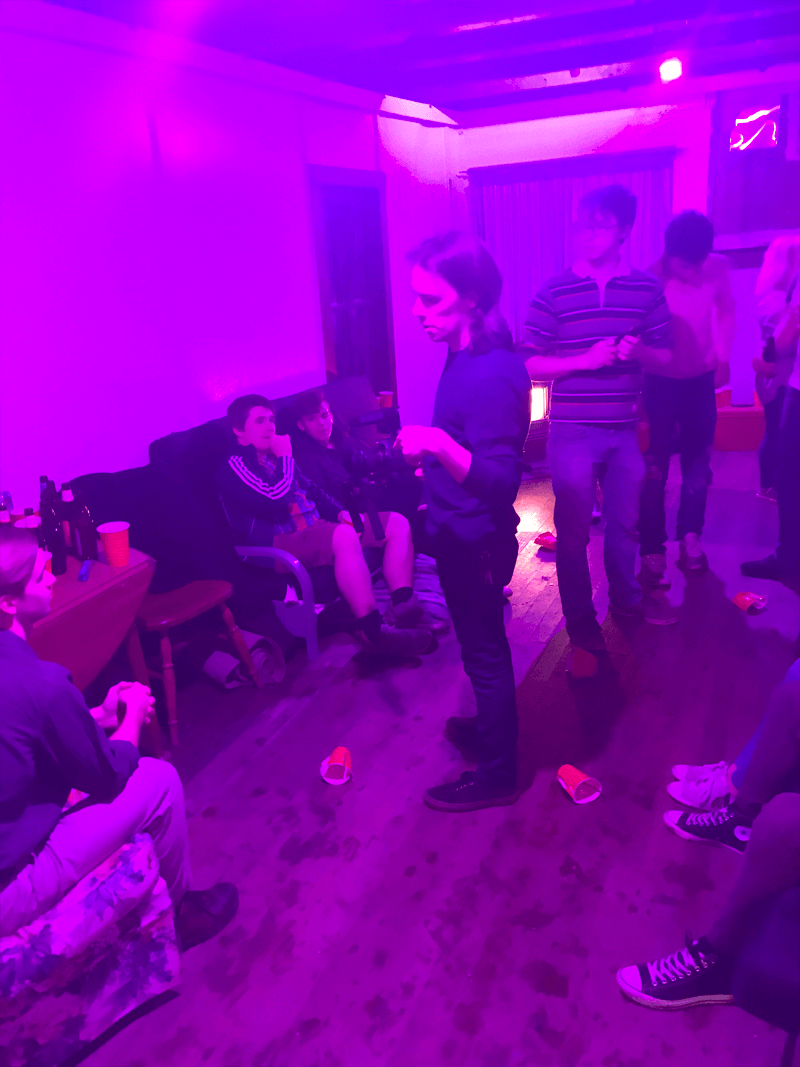 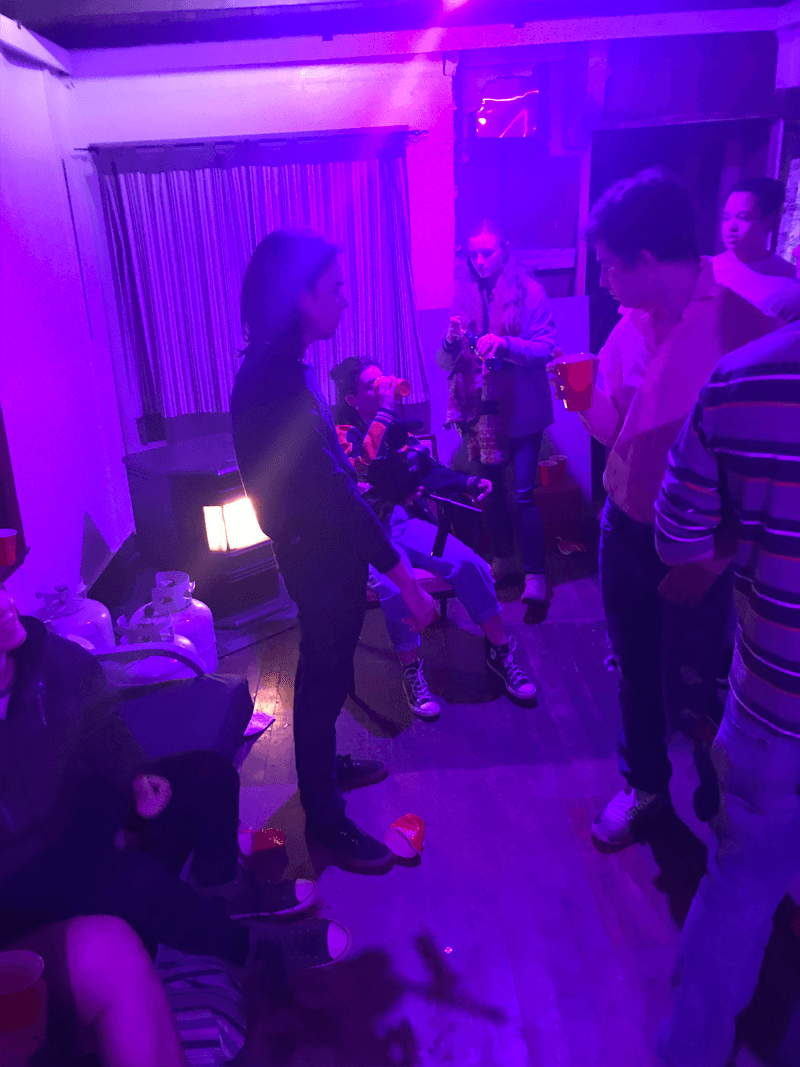 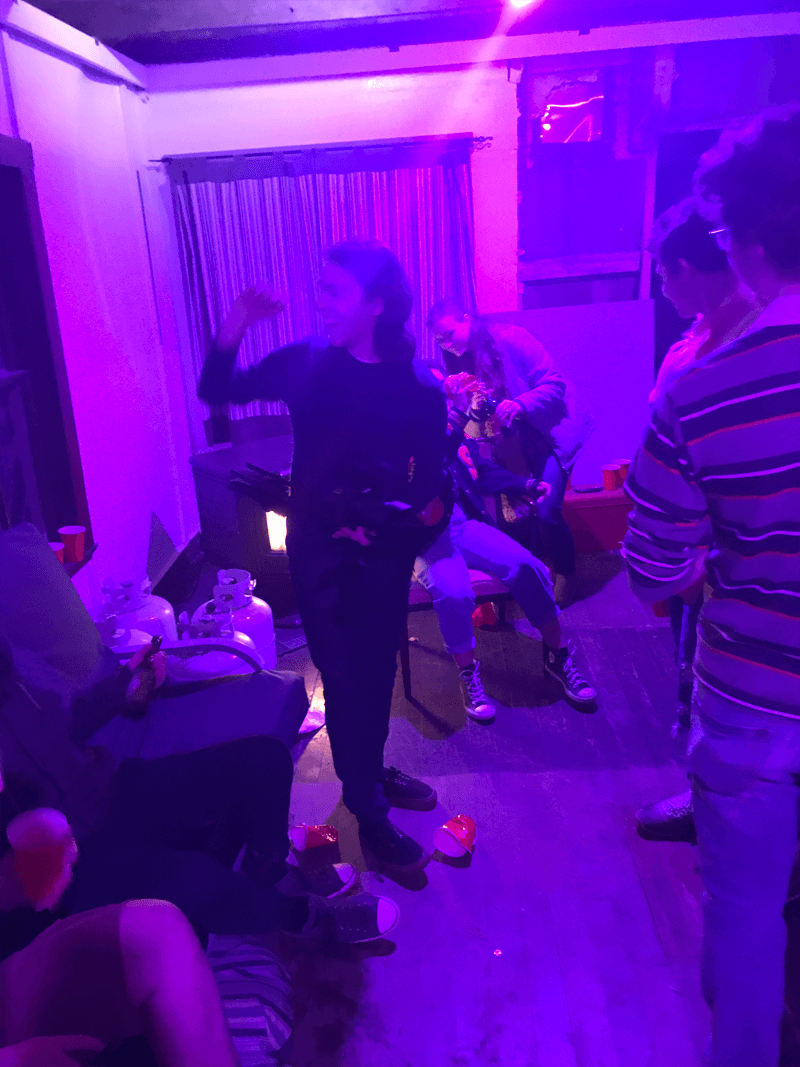 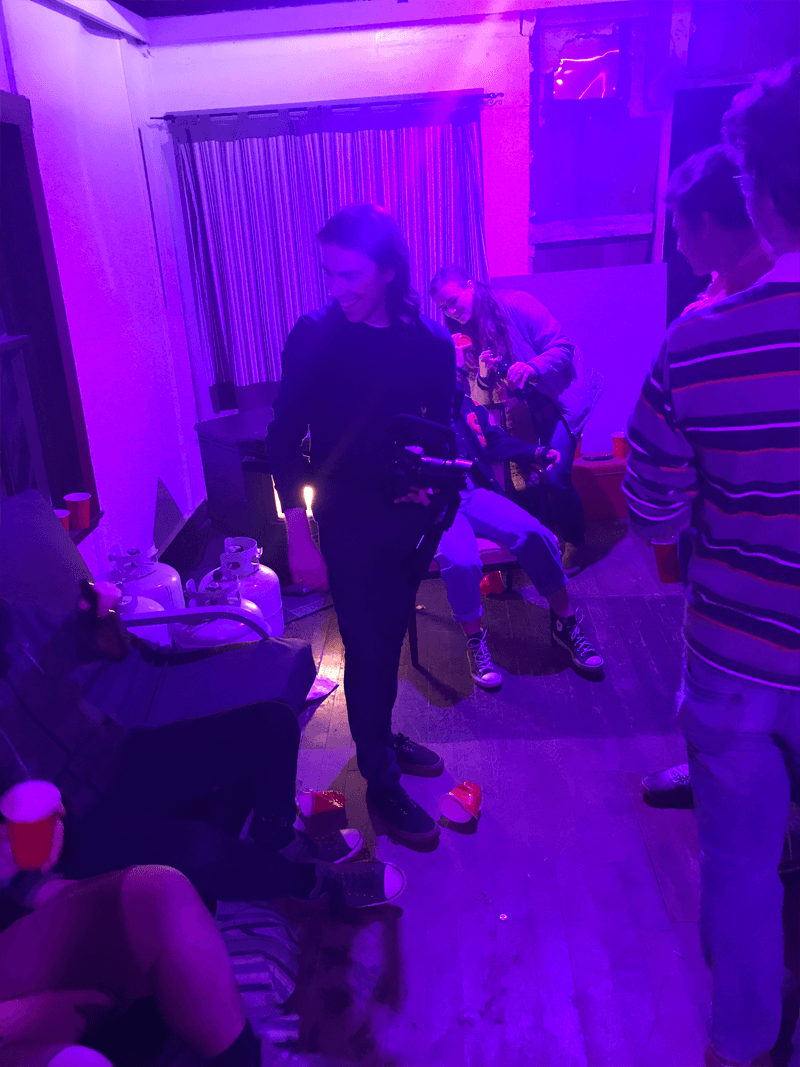 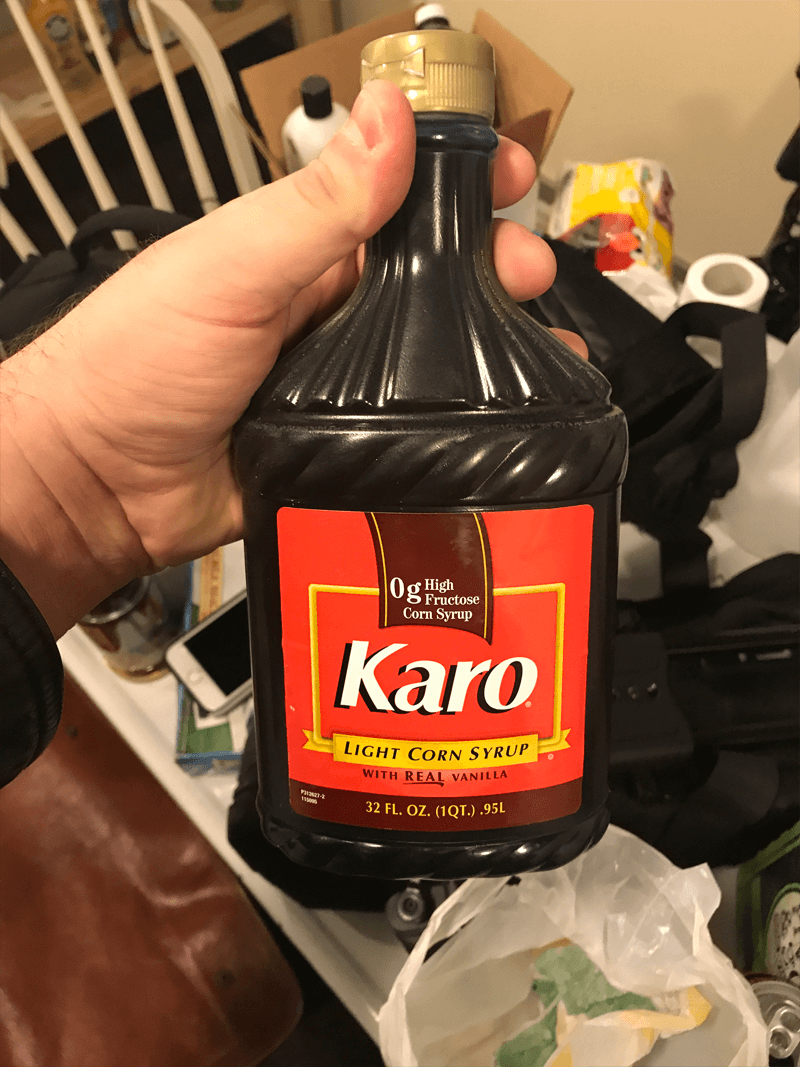 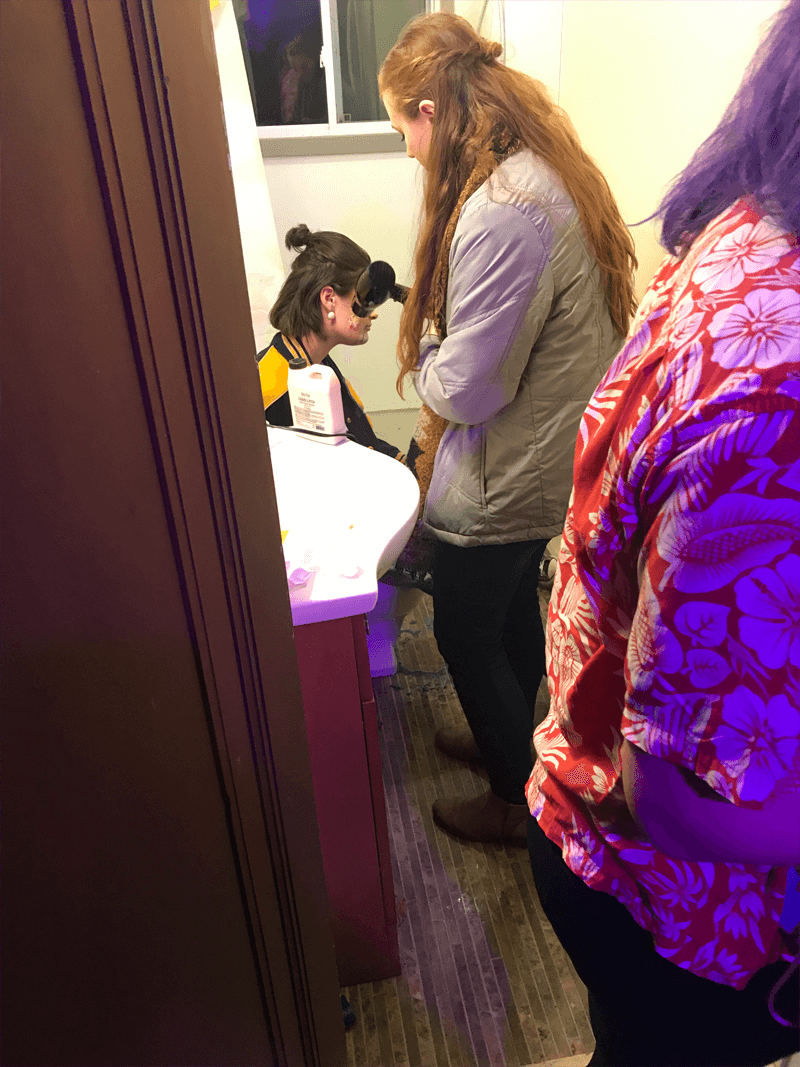 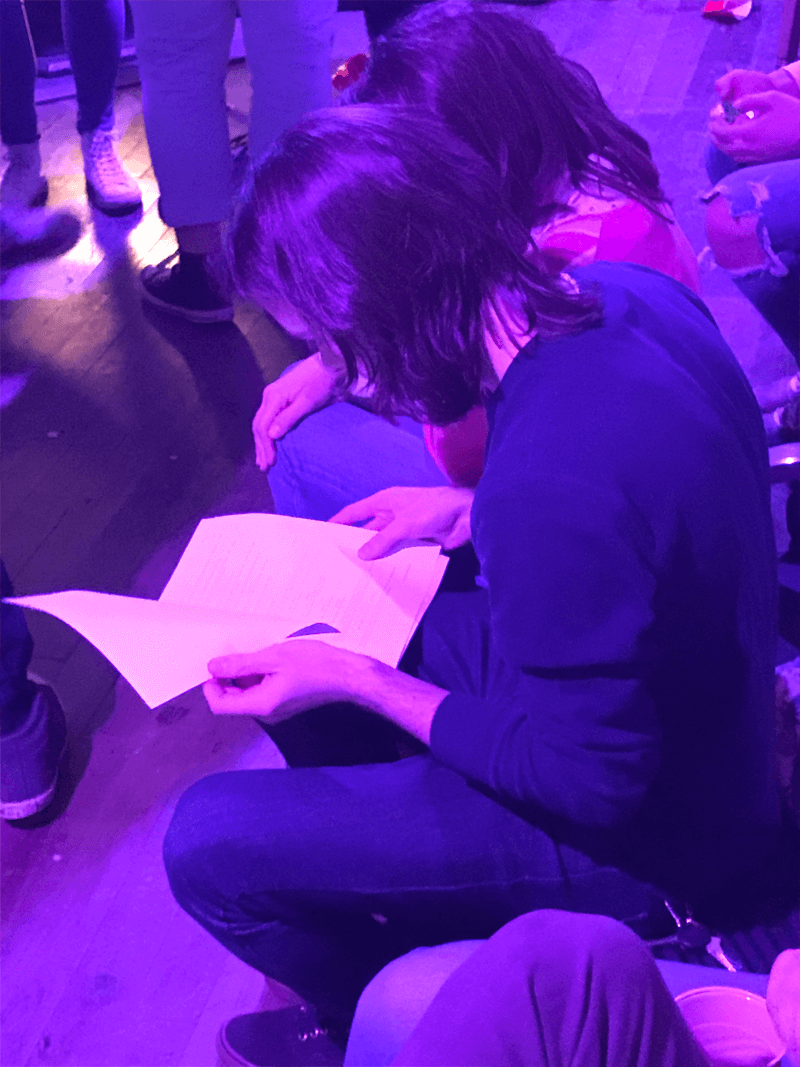 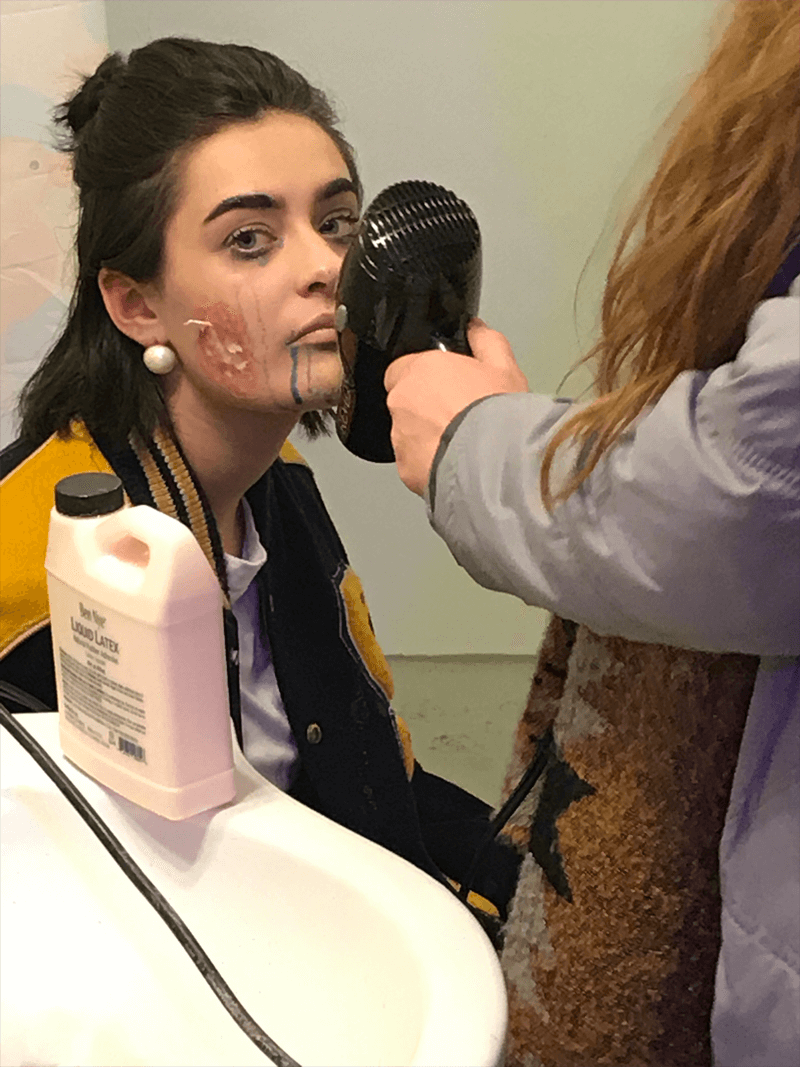 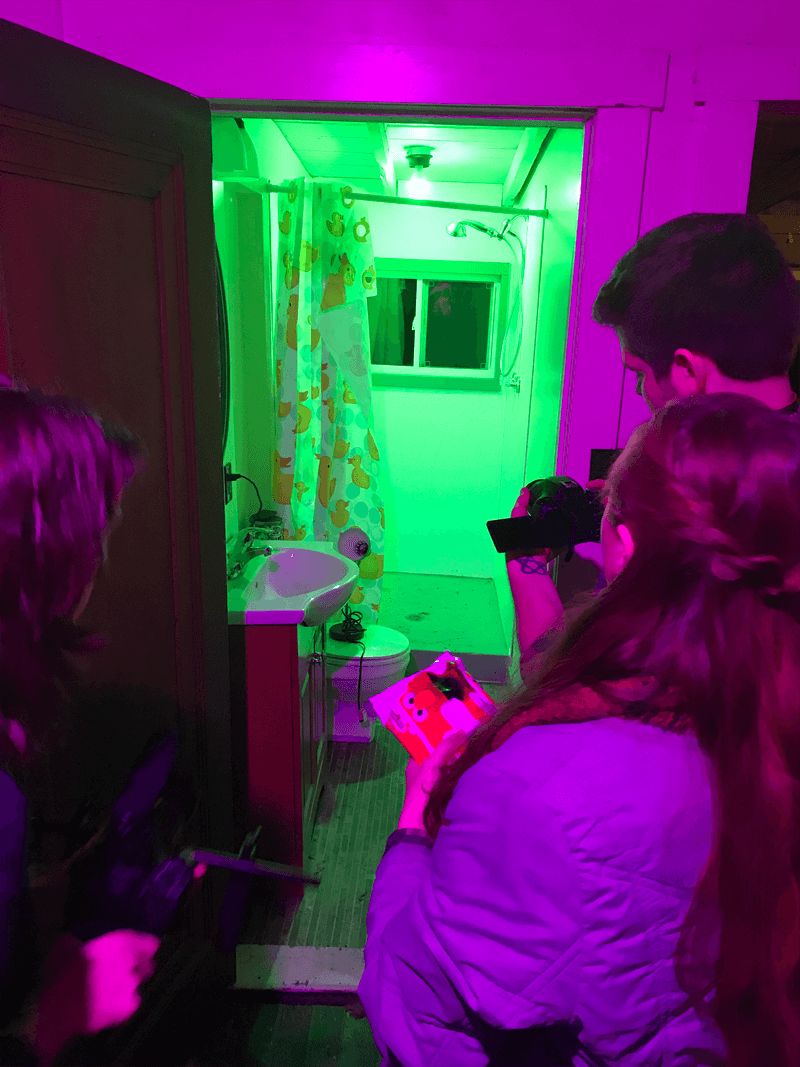 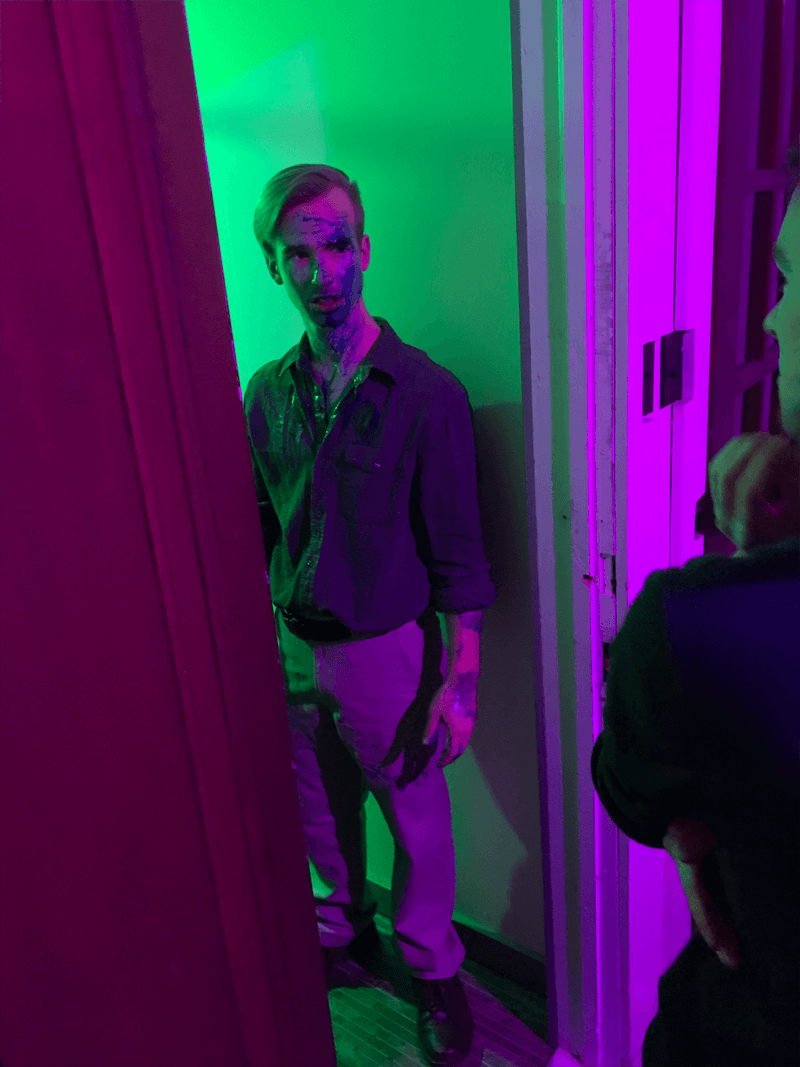 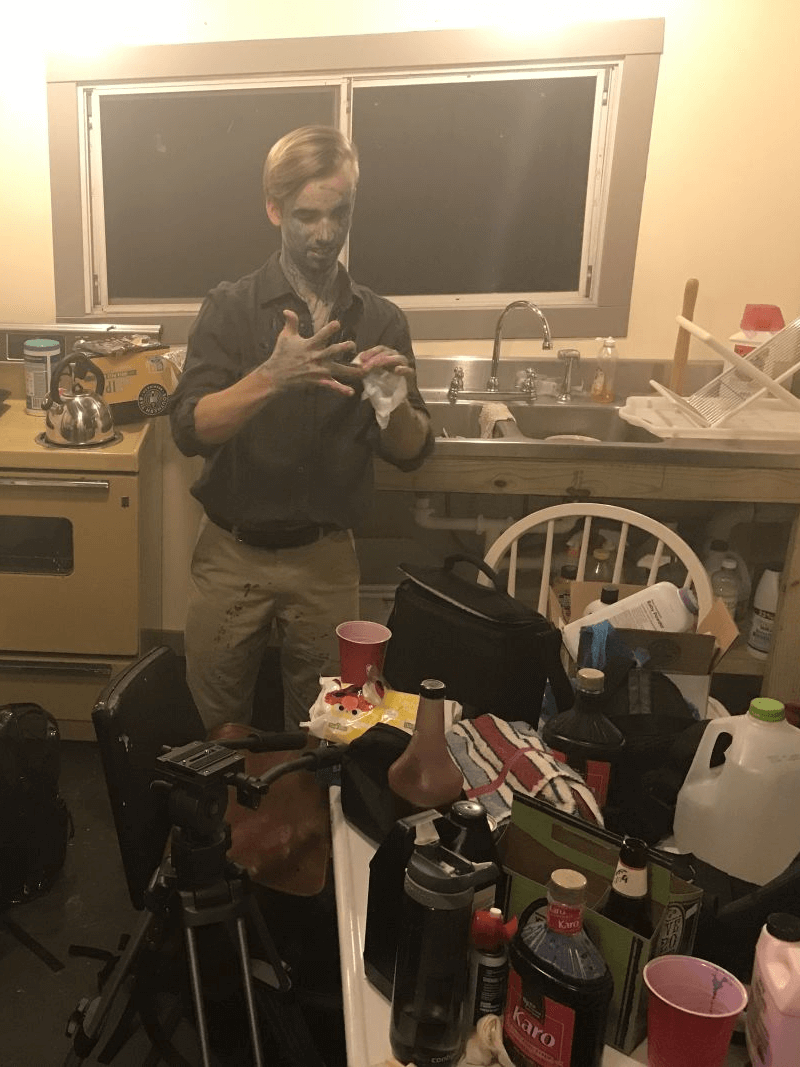 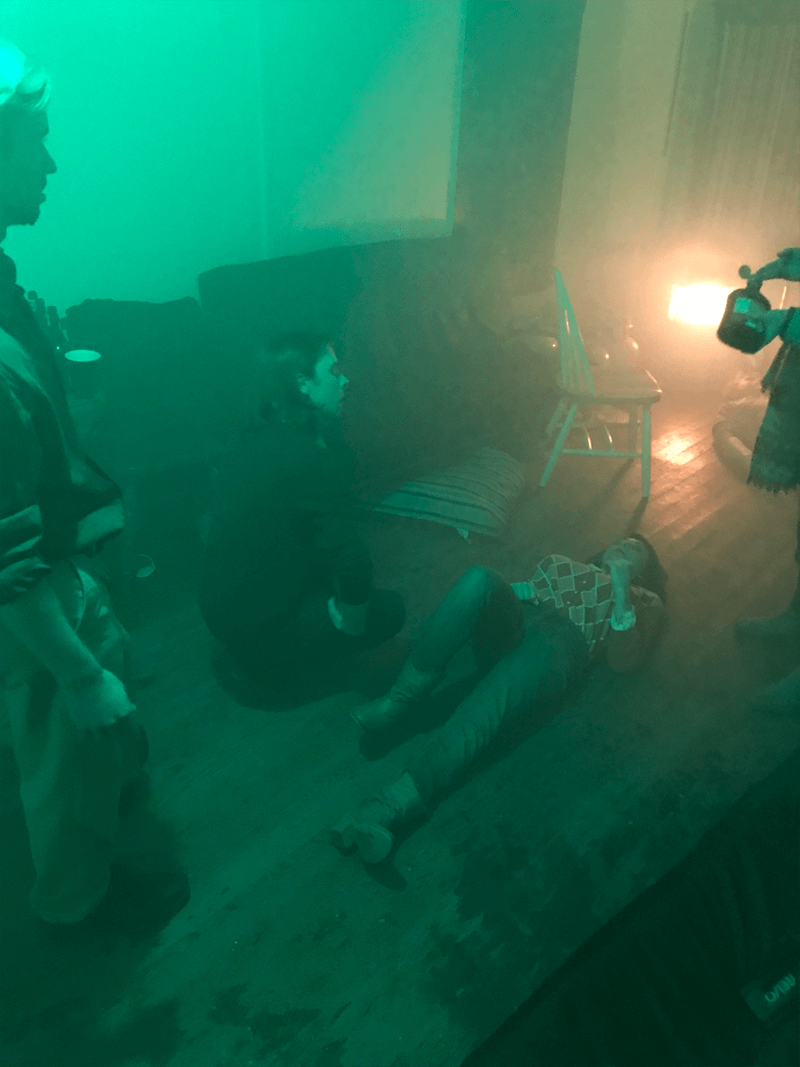 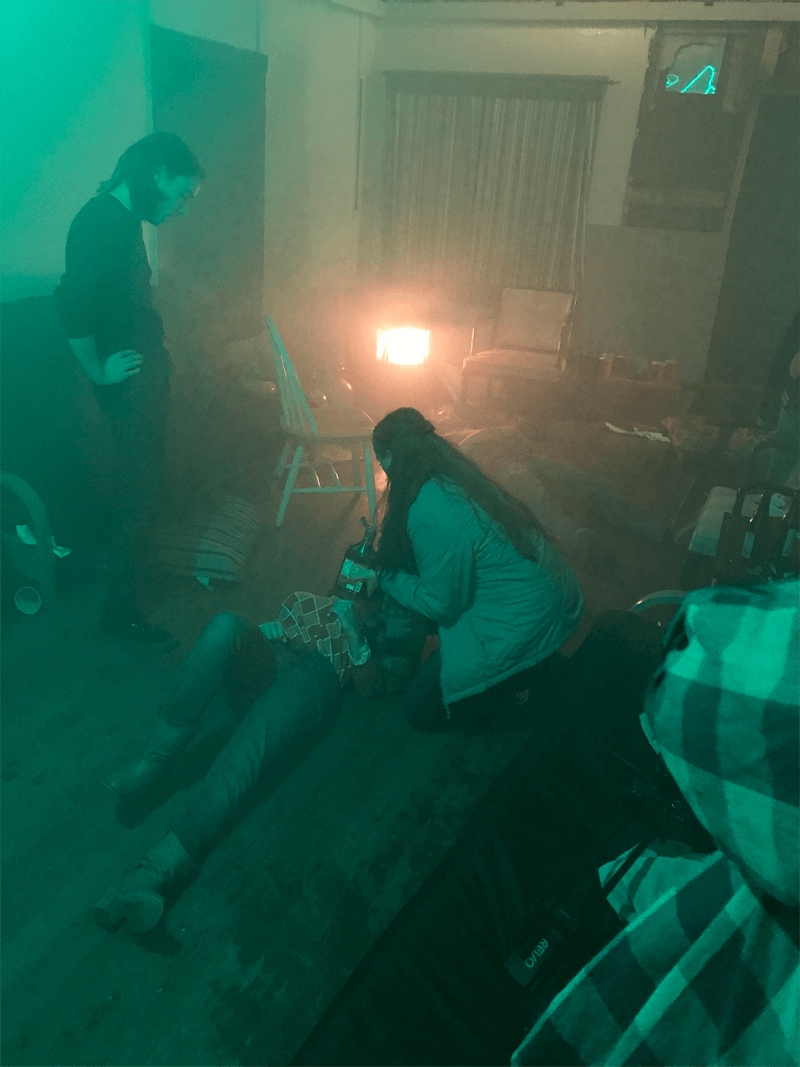 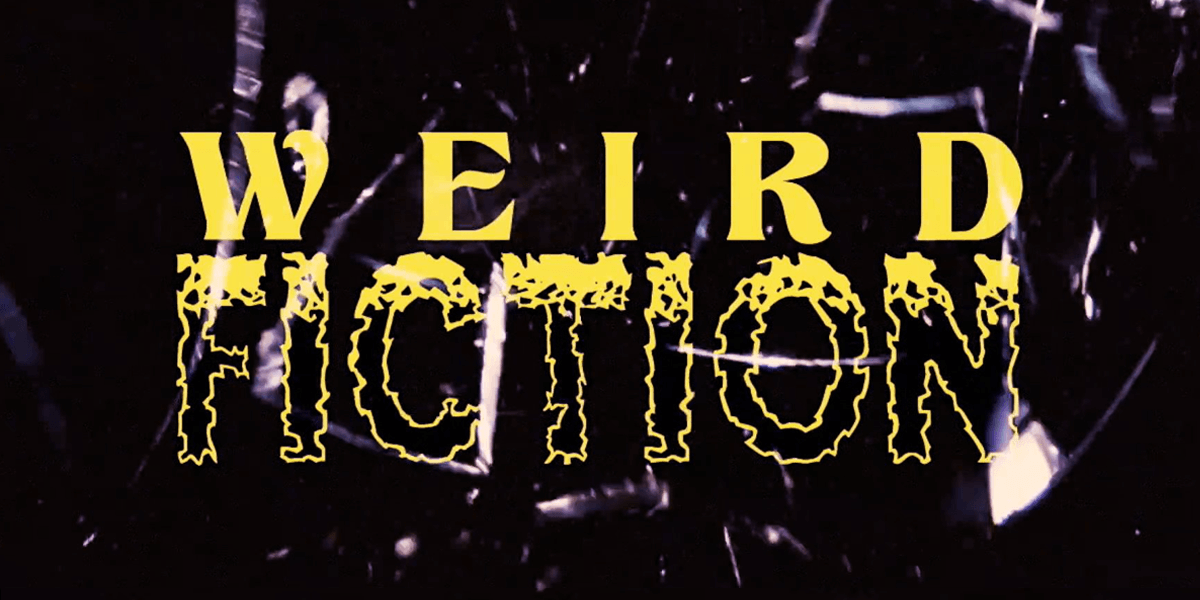 The team behind this indie film needs some help to reach their crowdfunding goal.