You Can’t Keep a Good Guy Down

A detailed look at the falls and resurrections of the Child's Play franchise. 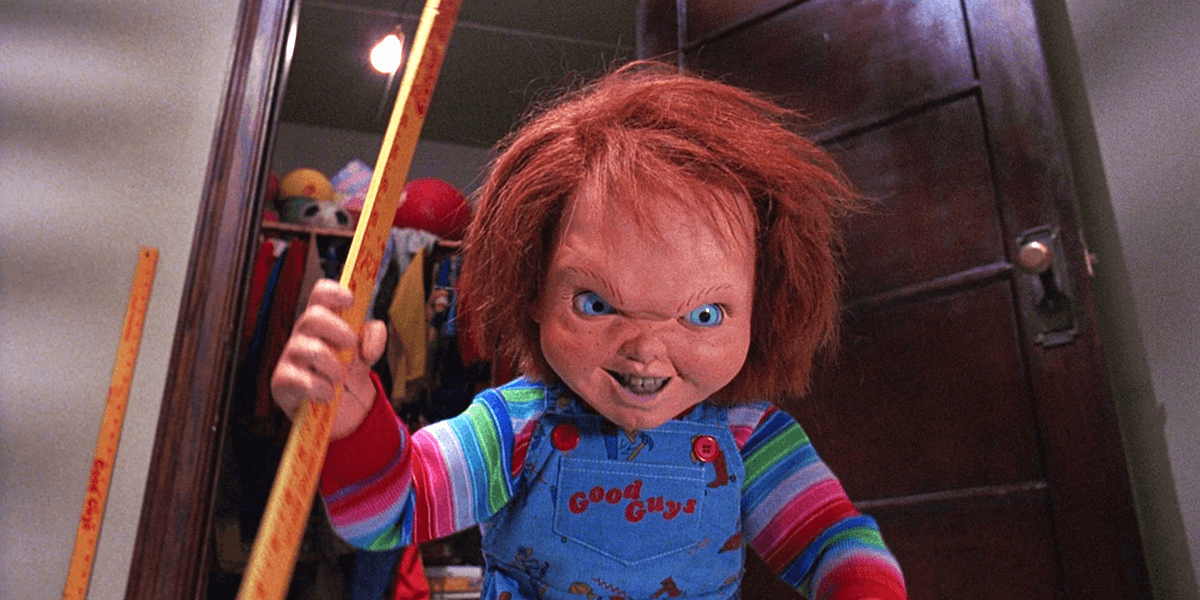 Any franchise with longevity typically misses the mark a few times. To be honest, when they miss the mark the first time, they usually don’t come back strong and continue to miss said mark by more and more. This is especially true for the classic horror franchises. However, there occasionally comes a contender who somehow manages to redeem itself far beyond what our feeble little minds could have ever expected, and they do it within the same timeline of events, negating the need for any reboots or remakes. Okay, so that rarely happens, but it actually did.

Imagine being a Child’s Play fan since the 1980’s and you watch Seed of Chucky. You are checking out, most likely. I'm not going to sugar coat it: Seed is not a good movie. It jumped off from the much-better-received Bride of Chucky, which, let’s face it, is a far cry from the suspense-filled first entry of the franchise. In the same way that the Resident Evil 4 video game changed the formula and made it work masterfully, that’s what Bride did for the Child’s Play franchise. After part 5 of both the Resident Evil game series and Child’s Play movie franchise came out, traditional fans were none too pleased.

These things happen and sometimes it is a necessary evil to bring a franchise back to its glory. After a long hiatus, fans were rewarded with Curse of Chucky and Cult of Chucky. This franchise did something that so many others fail to do. They made redeeming back-to-back sequels that made you care about the series and characters again, and with news of a Child’s Play television series in the works, I thought it was a good time to take a look at the franchise to date. 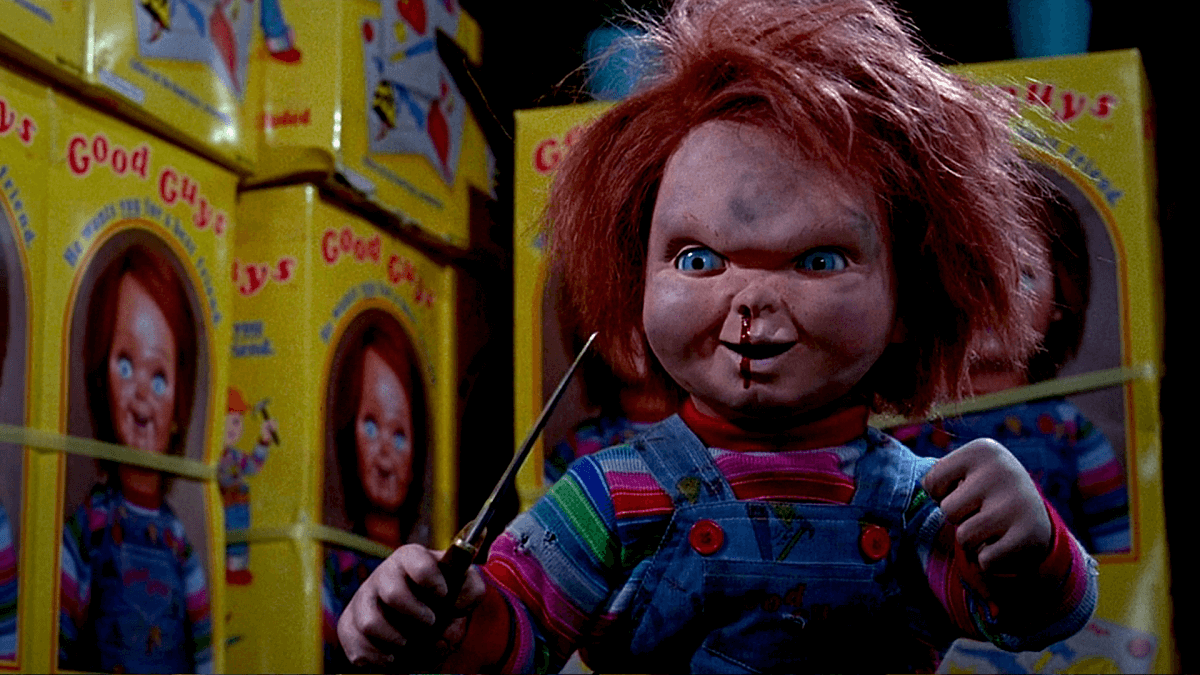 When part 3 was released, a lot of fans might have thought that was the end of the franchise. There was no little cliffhanger to signify we would be getting a sequel and Chucky’s death at the end was pretty definitive. Part 3 isn’t a particularly well-received film and I think fans were okay with the franchise ending there, but that wasn’t the case. Years later, the series redeemed itself for the first time with the incredibly fun and pleasing Bride of Chucky. 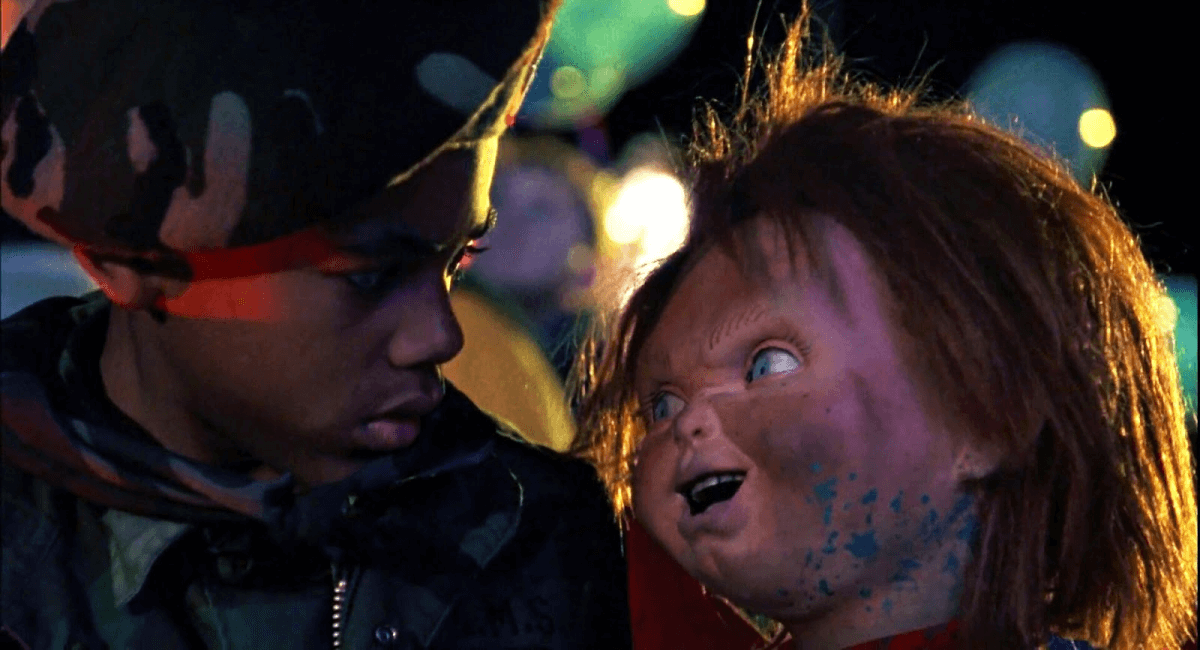 Bride crossed over into full horror-comedy and the movie shined for it, due in large part to the wonderful direction of Ronny Yu and a strong cast. Chucky was no longer scary, but more of a celebrated villain that we cheered on. This movie took Chucky in a whole new direction. which at the time worked better than the previous entry. Coming to terms with the comedy aspects of the character let Chucky truly shine in this sequel, moreso than in any of the previous movies. It was nearly to the point where it felt like a different franchise.

That’s not to say that Bride of Chucky didn’t have its faults. It brought in new lore for the first time since the original movie, even though it could get a little confusing. Andy, the recurring character from the first 3 movies was nowhere to be found, and we are instead introduced to the newest character, Tiffany, played by Jennifer Tilly. Well, things take a turn for the worse and what do you know, she gets her soul transferred to a doll as well. The dynamic between the two dolls was awkward, creepy, and insanely satisfying. The same can’t be said for the following sequel though.

Seed of Chucky takes place some time after Bride and this is where things really go downhill in the worst way possible, as this movie took all the elements that made Bride a fun flick and went overboard. Chucky and Tiffany are both back, obviously still encased in their plastic prisons, but also in the movie is Jennifer Tilly as herself (who portrayed Tiffany in the previous film). There is also Glen/Glenda, the child of Chucky and Tiffany. Can you begin to understand why fans don’t like this movie? This movie just muddles up everything from the last four movies and confuses the viewers more while adding more characters. In the end, Tiffany, who was played by Jennifer Tilly in the 4th movie, transfers her soul from the doll into Jennifer Tilly, the actress, so Tiffany, who was played by Tilly, wasn’t Tilly, but is now Tilly. Got it? 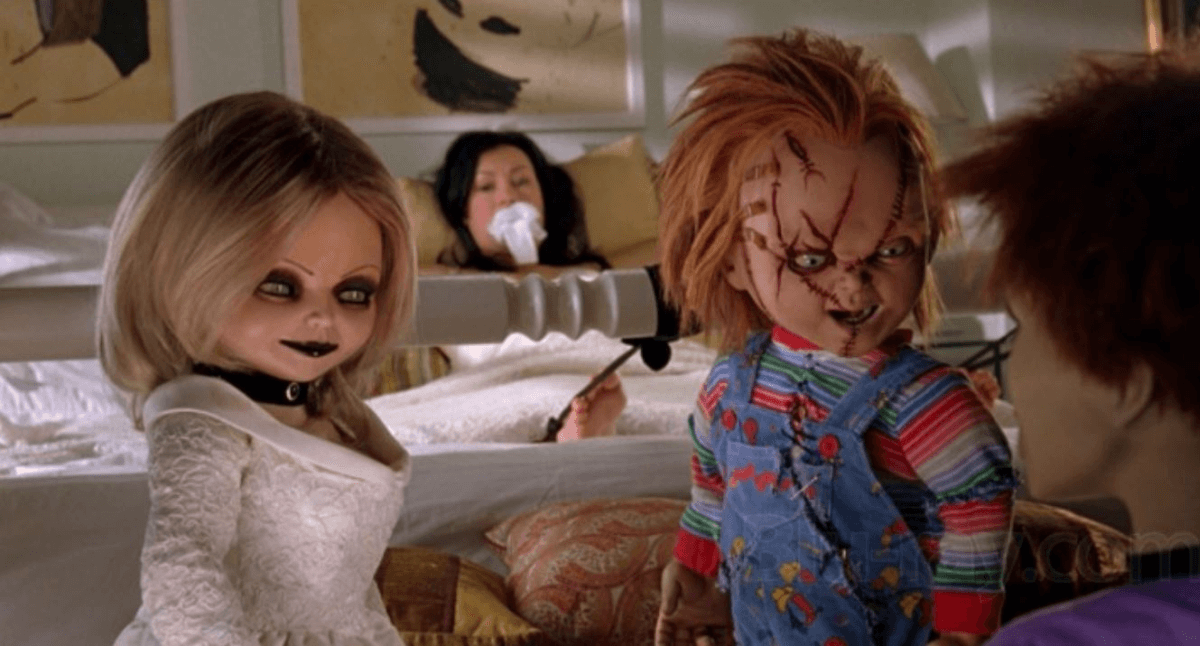 I am not going to dive into all the reasons why Seed was a failure because that isn’t the point of this piece. This movie took the franchise to its lowest point ever, and while the ending was ambiguous, fans again seemed to be okay with the franchise taking a break or just ending. There was a 6-year gap between Bride and Seed and nearly a 10-year gap from Seed to the next sequel.

When information first started coming out for Curse of Chucky, fans weren’t sure what to expect. Was the movie going to ignore the events of some of the previous films? Was it a sequel that took place in between other sequels? How were they going to make the story coherent after part 5? Well, what we did know is that series creator Don Mancini insisted this movie was going back to its darker horror roots of the first film. He wanted to bring the suspense back and he certainly delivered.

Curse of Chucky saw the revival of the franchise for a second time, but in a more intimate way. The series felt true again in nearly every aspect. Curse introduced us to a lot of new lore and gave the fans their best look at Charles Lee Ray when he was still human. Twists and turns were around every corner in the 6th entry of the franchise and fans absolutely loved it. A direct to VOD/Blu-ray 6th film in a long-standing horror franchise turned out to be one of the best in the series, which is something that no one saw coming. Somehow, the franchise once again had new life and fans were excited. 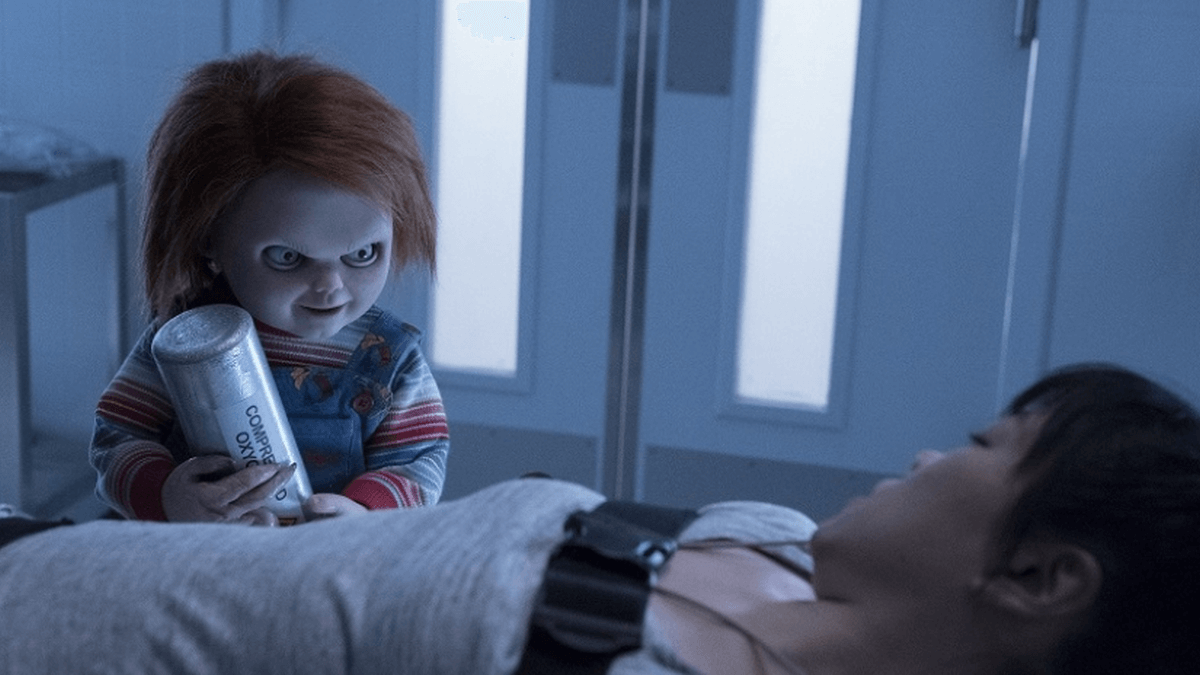 With the stinger ending in Curse, fans were confident another sequel would show up and sure enough it did. Cult of Chucky, the 7th film, kept things dark but added some comedic charm back to the franchise. It never went overboard or felt out of place, surprisingly. The storylines and events in this movie really start to get weird and the franchise is left to expand even further. Cult was another success that truly opened up a world of possibilities for the future of the franchise, which leads us to the present state of the series: television.

With the recent news of a Child’s Play television in the works, it’s impossible not to fathom how awesome this show could be if they use the right formula. With so many characters and paths now open to explore, television is the perfect format to help flesh out all of these ideas that Mancini has. Without being constrained by the run-times of feature films, the Chucky world might finally come full circle. Missteps can happen if the show is not released on the right network or if it isn’t allowed to be R-rated, but right now this is one of the most exciting things to happen to horror in a long time.

Child’s Play was a goofy concept that managed to be horrifying. Decades have passed since its inception and we have seen the characters and tones change countless times, leading to the near-death and subsequent resurrection of the series on more than one occasion. It’s a testament to how good storytelling and proper direction can course-correct any train wreck; the passion just has to be present. With the series at an all-time high point and fan excitement through the roof, the future seems incredibly bright for this classic franchise, which still continues on its original timeline, unlike every other major slasher franchise from the 70’s and 80’s. Play time is over. 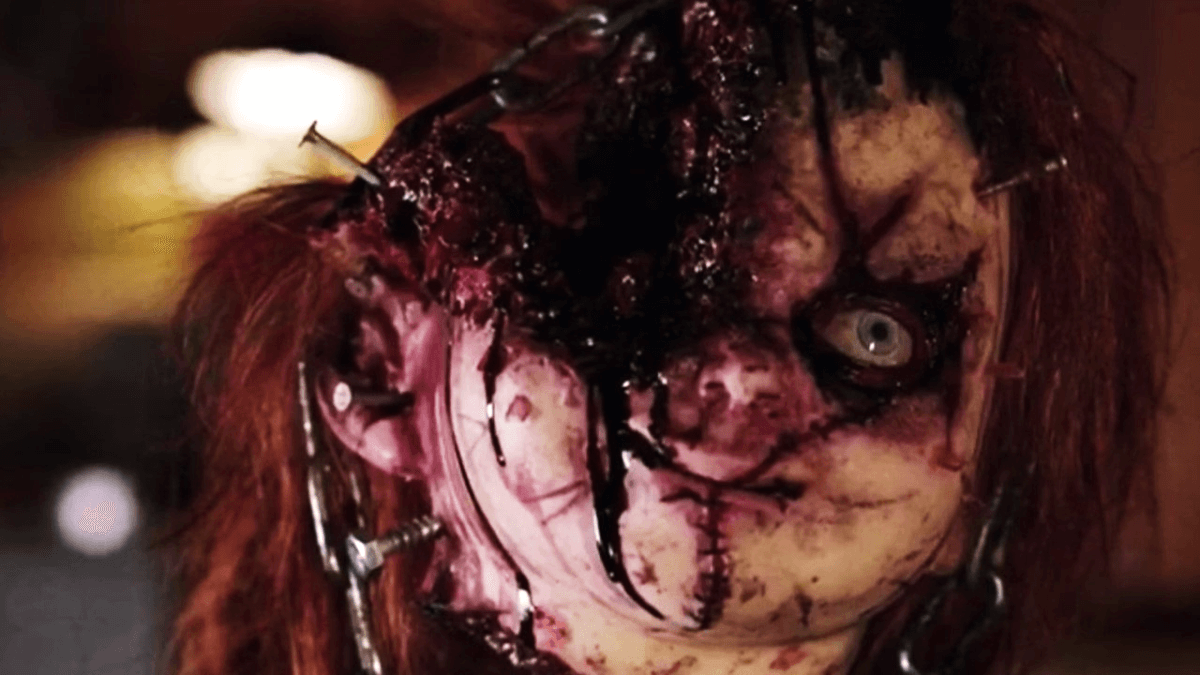